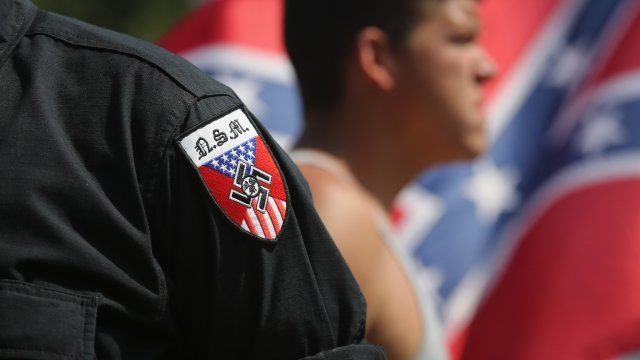 The Southern Poverty Law Center released its annual "Year in Hate" report on hate groups. In it, the organization says 2017 saw a rise in white supremacist groups.

In a statement, an official from the SPLC said, "President Trump in 2017 reflected what white supremacist groups want to see: a country where racism is sanctioned by the highest office, immigrants are given the boot and Muslims banned."

This focus on the Trump administration and radical right ideology is similar to last year's report. But this year, the difference lies in Trump's actions as president rather than just his rhetoric as a candidate.

Those actions include retweeting anti-Muslim Twitter posts and equating "Unite the Right" white supremacist rally participants with their opposition. The White House, however, rejects the SPLC's assertion that Trump "buoyed" the rise of white supremacist groups. In a statement to The Washington Post, White House spokesperson Raj Shah said, "The president condemns hatred, bigotry and violence in all forms." 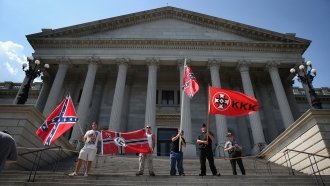 The RNC Has Officially Condemned Nazis, KKK And White Supremacists

The SPLC's latest report identifies 954 active hate groups in the U.S. It says that's an increase of 4 percent from 2016. It says the groups that saw rises last year include neo-Nazis, anti-Muslim groups, anti-immigrant groups, anti-government groups and black nationalists.

The SPLC makes it very clear that black nationalists shouldn't be confused with Black Lives Matter or any other activist group working for civil rights. It says black nationalist groups are fringe groups directly, and more aggressively, responding to white supremacy. It says they're more likely to propagate anti-LGBTQ, anti-Semitic and anti-white rhetoric, as well as conspiracy theories. And unlike some other hate groups, the SPLC says they have "virtually no supporters or influence in mainstream politics."

Beyond those factions, neo-Nazi groups grew the most last year — from 99 groups in 2016 to 121 in 2017. But the Ku Klux Klan fell from 130 groups to 72. The SPLC thinks the "new generation of white supremacists" are rejecting the KKK for the so-called "alt-right" movement.

Editor's note: This story has been updated to include the perspective of the Trump administration.