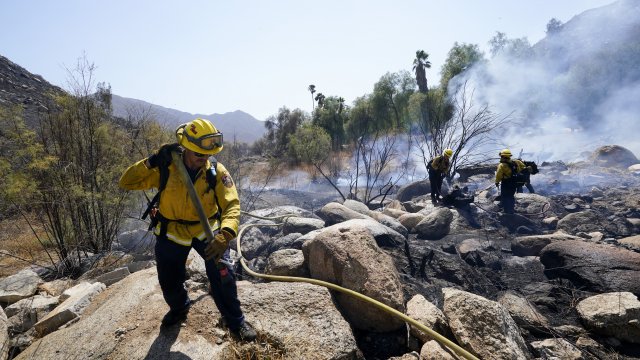 In southern California, a brush fire is billowing smoke into the skies near Los Angeles.

At more than 5,000 acres and just over a quarter contained, the Route Fire is forcing evacuations near the city of Santa Clarita.

But the fire is burning near a reservoir, giving firefighters a leg up in containing it from the air.

That’s despite dangerously high temperatures across most of California this week. With highs in the triple digits and already dry conditions, it’s a cocktail of fire danger.

"How can we maintain our resilient mindset, how can we work our way through these things and how can we thrive, not just survive, in an era of such extremes?" Gov. Gavin Newsom asked.

Officials are still asking residents to limit air conditioner use in the afternoon to prevent strain that could threaten the grid.

"The problem that California faces on these hot days is almost entirely air conditioning," said Severin Borenstein, energy and economics expert at UC Berkeley. "If we can get people to increase their thermostat settings just a few degrees, turning it from 75 to 78, that takes a huge load off the system."

It's now a burning urgency to find long-term solutions.

"No one denies heat waves have existed long before climate change, but their duration and their intensity have never been more challenging," Gov. Newsom said.