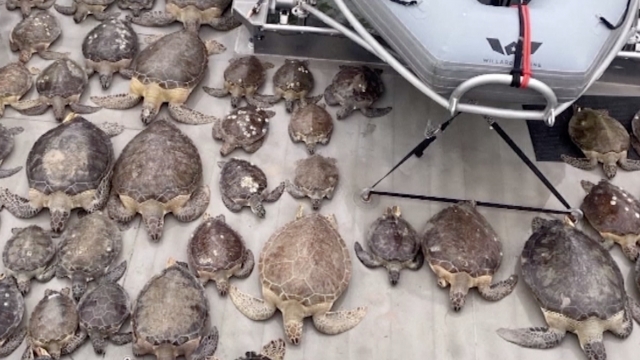 "Get it by the mesh, it's going to come off. There you go," Henry Rodriguez said.

Henry Rodriguez of South Padre Island says he was one of the first to realize the sea turtles along the coast were going to need help.

"I knew that I had to do something," Rodriguez said.

Rodriguez, an owner of a boat charter business which specializes in dolphin tours and fishing trips, says he and a team of volunteers have managed to rescue a few hundred turtles from the freezing water that has struck Texas in recent days, some as big as 200 pounds.

"If this ecosystem is putting food on my table, and it's made, you know, supporting my family, my very first thought was, why not give back to my ecosystem?" Rodriguez said.

Racing against the clock, the South Padre Island community is using boats, nets and cars along the shoreline to save sea turtles stunned by the freezing weather, an event that could result in their drowning.

“They are literally frozen. Stunned. It's catatonic, a similar human condition. And as a result of that, they float to the top of the water. And even though ... they know they need to raise their breath to breathe, they can't. Their body doesn't respond, and they drown on the top of the water," Wendy Knight, executive director of Sea Turtle Inc., said.

Rescuers at Sea Turtle Inc. say roughly 5,000 sea turtles have been rescued since the harsh weather began, a record-breaking number that has resulted in an overflow facility being created at the city’s convention center amid power outages.

"This is not a new phenomenon. What became urgently different is the volume," Knight said. "And I think what's really important, and what says more about our community than that, is to remember that when hundreds and thousands of people were going out and collecting turtles and bringing them to us, those same people had gone days without electricity."

With his boat now docked due to engine problems brought on by the cold weather, Henry Rodriguez says he is hopeful the weather will warm up soon so that some of the turtles can be safely released back into the wild.

"We are expecting another freeze tomorrow night. Hopefully after that, it'll warm back up,"Rodriguez said.

"I'm willing that we're going to have a very high success rate of ones that we get to release back into the ocean, then there's going to be a patient section," Knight said. "So they will stay here with us for an extended period of time."

"If you can save one turtle, anybody out there, one turtle, that'll make a big difference," Rodriguez said.