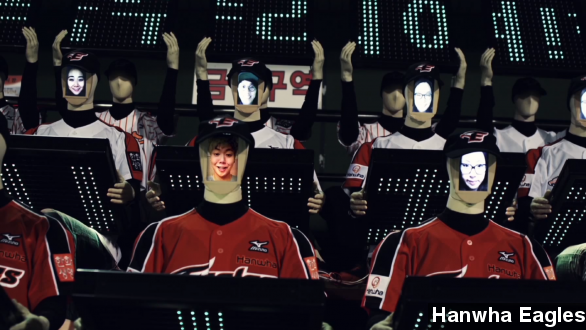 By Evan Thomas
July 27, 2014
Actual fans can upload their likeness to the robot’s face-screen, and send messages to its LED board.
SHOW TRANSCRIPT

There’s a robot for just about every job these days — now you can even get one to attend your ball game for you.

Last week, South Korea’s Hanwha Eagles debuted a collection of robotic proxies that fans can control from home. Users can send messages to the robot's videoboard, and even upload their face to its head.

Attendance might be low because the Hanwha Eagles aren’t the greatest team in baseball. The Score reports they’re 8 and 12 on the season, and a writer for Quartz points out they haven’t won a championship game in 15 years.

“The Eagles are so bad that its long-suffering fans, who to continue to turn up knowing that the Eagles will almost certainly lose, have earned the nickname ‘stone Buddhas,’ for their superhuman patience.”

Some outlets are calling the bots gimmicky, or even downright creepy, but Digital Trends points out they’re a hit — fans have sent nearly 90,000 messages using the robots’ LED boards so far. (Via SlashGear, Consumerist)

“Of course it’s a daft and slightly creepy idea, but there is some sense to it — as Twitter showed during the World Cup, fans love to get involved over social media, and this is one way of tapping into and using that online enthusiasm.”

And hey — this way there are at least a few fans in the stands all the time.