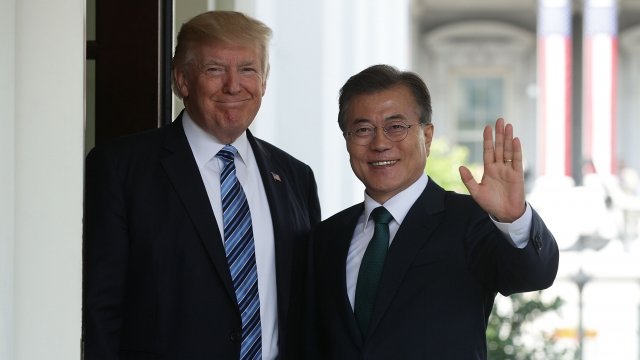 President Moon Jae-in made the comment in a cabinet meeting.

He was responding to a letter written by a former first lady of South Korea congratulating him on the successful meeting he had with North Korean leader Kim Jong-un last week.

During the summit, Moon and Kim signed a declaration stating there'd be "no more war on the Korean Peninsula" and that they agree to "completely cease all hostile acts against each other."

But Moon says Trump should be rewarded for the meeting's success, and others seem to agree.

Trump himself appeared to take credit for the historic breakthrough unfolding between the two Koreas.

But some seemed skeptical about the president's chances to actually win the prize, including his own son.

Trump is expected to meet with Kim himself in the coming weeks. It's still unclear exactly when that meeting will happen.

But in a tweet Monday, Trump mentioned the possibility of meeting Kim on the border between North and South Korea — where the summit between Kim and Moon took place.