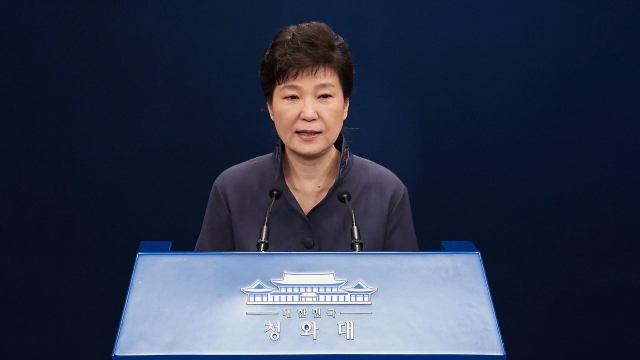 SMS
A Really Weird Scandal Is Going On In The South Korean Presidency
By Ethan Weston
By Ethan Weston
October 29, 2016
It's not often a scandal involves a cult leader's daughter having major influence over a president — but this one does.
SHOW TRANSCRIPT

South Korea's presidency is facing a scandal that might put it in danger of collapsing — and it sounds more like a political TV drama and less like real life.

At the the heart of the scandal is South Korean President Park Geun-hye, who reportedly relied on an old friend — Choi Soon-sil — for political counsel.

That doesn't sound so bad, but Choi is the daughter of an alleged cult leader, Choi Tae-min. Leaked cables from WikiLeaks show concern that he had "complete control over Park's body and soul during her formative years."

SEE MORE: South Korea's Response To A Threat From The North Wouldn't Be Pretty

Park and Choi Tae-min met in the late '70s shortly after Park's mother — the former first lady of South Korea — was assassinated. He told Park her mom had come to him in a dream.

Park's opponents are now accusing Choi of having the same kind of control. Choi seems to have been consulted in everything from Park's day-to-day wardrobe to editing her speeches — speeches Choi didn't have security clearance to see.

That kind of influence has some critics comparing Choi to Rasputin — much like they did her father.

Choi also runs two nonprofits which appear to have used her connection to the president to raise money — she's accused of using some of that cash for personal use.

All across South Korea people are demanding Park step down, citing worries over the amount of control the Choi family had over the presidency.

Park gave a short public apology to the nation and forced 10 of her senior aides to resign. But since the scandal broke, her approval rating has dropped to an all-time low of 14 percent.