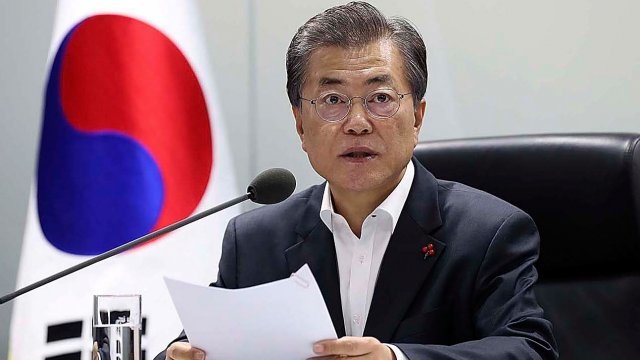 South Korean President Moon Jae-in's visit to D.C. comes as tensions between the U.S. and North Korea are threatening to flare up again.

South Korean President Moon Jae-in is more popular than ever at home, and he has diplomacy with North Korea to thank. Now he just needs to make sure it survives contact with President Donald Trump's negotiating tactics.

"We cannot let that country have nukes. We just can't do it," Trump told the press recently.

Trump is scheduled to meet with North Korean leader Kim Jong-un next month, and he's not backing down on his insistence that North Korea should completely dismantle its nuclear program in exchange for sanctions relief.

Up For Debate: Can Negotiations Convince North Korea To Denuclearize?

Newsy partners with Intelligence Squared U.S. to restore critical thinking. In this debate: Can negotiations convince North Korea to denuclearize?

But North Korea has strongly rejected that plan — so much so that Trump is reportedly rethinking attending the summit after all, according to The New York Times.

Now Moon is visiting the White House, and his top priority is to convince Trump that diplomacy is still worth pursuing with the North, even if he doesn't get what he wants right away.

Moon helped lay the groundwork for the summit by emphasizing the North's willingness to eventually denuclearize. He also credited Trump for a lot of the diplomatic progress on the peninsula, even suggesting Trump should win the Nobel prize.

Now that tensions are flaring up again, Moon is on the hook to convince the U.S. that North Korea really does want to reach a diplomatic agreement. Relations between the U.S. and South Korea could sour if Trump feels like Moon overpromised on what Kim was willing to give up.

But Moon's faced political risks throughout the process. His approval rating in South Korea dropped several times during the 2018 Winter Olympics due to concessions he made orchestrating North Korea's participation.

And it's worth remembering that less than a year ago, Moon had to worry about North Korean missile tests and U.S. plans for a pre-emptive strike. Trading those fears for diplomatic headaches still probably seems like a good deal to South Korea.