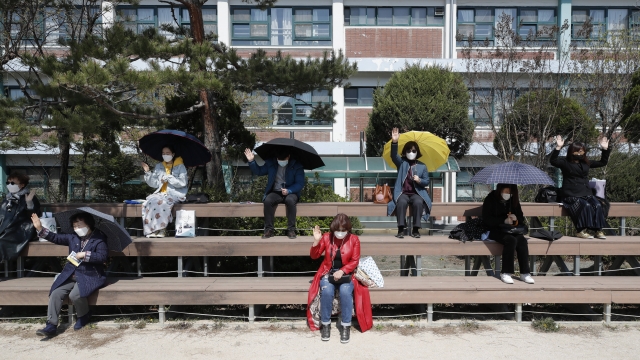 Early on, South Korea feared becoming a global hot spot for the coronavirus. It got its first case in January and reacted with alarm as infections spread in early February among a  religious sect in its populous city of Daegu.

On Thursday, South Korea reported zero new domestic coronavirus cases, its first day without a new infection in 10 weeks. It did have four cases from people arriving from other countries.

Still, it's a remarkable passage in a country that became an international model for testing and disease prevention.

With a population of nearly 52 million people, South Korea as of Thursday had fewer than 11,000 coronavirus cases and just 247 deaths, according to Johns Hopkins.

On Tuesday, its new infections totaled just 14. That same day, the U.S. reported more than 24,000 new cases as it surpassed the 1 million mark.

South Korea's response began right after New Year's Day as the country sent researchers to Wuhan, China, where the virus outbreak began. South Korea also tracked its own citizens who had traveled to the region.

At home, South Korea implemented isolation measures and a contact tracing system for people potentially exposed. The government didn't share names of those infected. But it sent cellphone alerts to people who may have come in contact with them.

South Korea flattened the curve. And next week, pitchers will be throwing them on opening day for professional baseball. The fans must stay home. And spitting and high-fives are banned. But baseball is back, and South Korea is on its way.