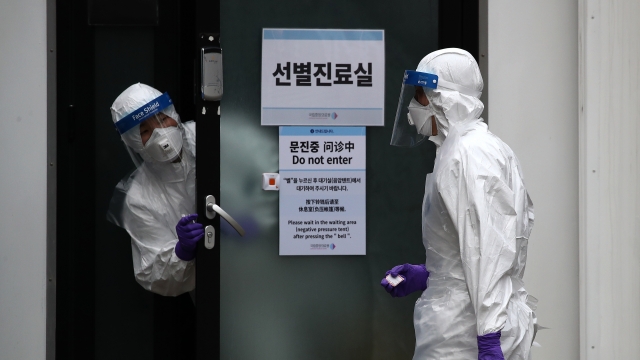 Eight people have died from the virus in South Korea, and more than 830 others are infected.

This means South Korea now has the second-largest outbreak of the virus, after mainland China. Globally almost 80,000 people have been diagnosed with the coronavirus, and more than 2,600 people have died.

South Korea's threat alert level was last raised this high in 2009 when the H1N1 outbreak was happening. In his announcement Sunday, Moon said the country is facing "a grave turning point" with the outbreak and that it will "drastically strengthen [its] response system."

South Korea already imposed emergency measures on two cities with large numbers of infections. As part of those measures, residents are being asked to stay home as much as possible and wear masks at all times. By raising the alert level, government officials can now close schools, restrict public transportation, and even lock down cities.

The South Korean government has also temporarily shut down a religious organization that appears to be a hotbed for the virus. A majority of confirmed cases in the country are people who are members of the church. They've been instructed by the church to stay inside their homes as much as possible.