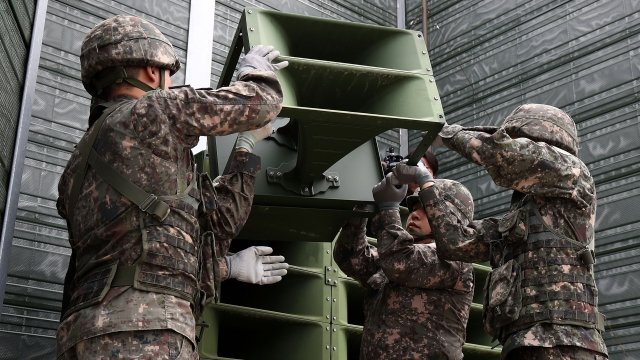 SMS
South Korea Starts Taking Down Propaganda Speakers Along Border
By Katherine Biek
By Katherine Biek
May 1, 2018
Officials have used the speakers to broadcast criticism of North Korea, along with news and even Korean pop songs.
SHOW TRANSCRIPT

South Korea began dismantling its loudspeakers along its border with North Korea Tuesday.

The loudspeakers have been in place for decades. South Korea used them intermittently to broadcast criticism of North Korean leader Kim Jong-un's regime, along with news and even Korean pop songs.

Officials turned off the giant speakers in late April to "ease the military tension" between the two countries ahead of the inter-Korean summit.

During that summit, South Korean President Moon Jae-in and Kim signed a declaration stating there'd be "no more war on the Korean Peninsula" and that they'd agreed to "completely cease all hostile acts against each other." The two sides also agreed to denuclearization.

The South Korean Defense Ministry said it believes North Korea is also taking down its own set of speakers along the border.