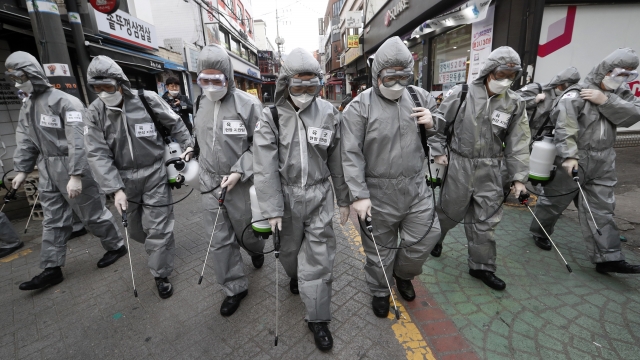 South Korea is expanding screenings for the coronavirus in the city of Daegu, which is at the center of the country's outbreak.

The coronavirus has killed at least 33 people in South Korea and infected more than 5,600 others. The country has the second-largest outbreak of the virus, after mainland China.

The majority of people diagnosed in South Korea live in Daegu. Up until this point, local health officials have focused on testing members of a religious organization in the city that's connected to the rapid spread of the virus.

Now The Wall Street Journal reports officials plan to prioritize testing Daegu residents who are not connected to the church. About 2.5 million people live in the city.

South Korean President Moon Jae-in declared war against the coronavirus Tuesday. He also announced that $25 billion in funding will now be put toward stopping the outbreak.

Some of that money will go toward purchasing more hospital beds. Earlier this week, officials in Daegu said it didn't have beds for about 2,000 patients. Moon also ordered the country to start stockpiling face masks.