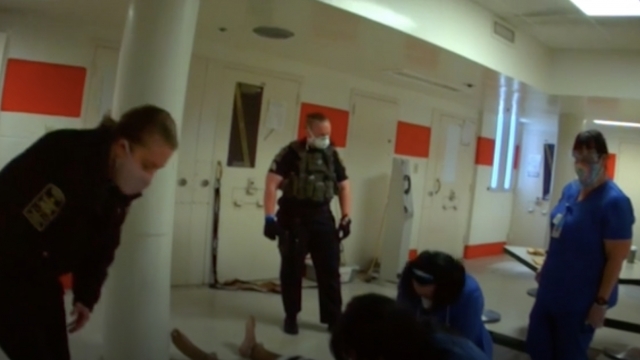 SMS
South Carolina Deputies Fired After In-Custody Death
By Eliana Moreno
By Eliana Moreno
May 18, 2021
The family of Jamal Sutherland says he suffered from a mental illness.
SHOW TRANSCRIPT

Two detention officers involved in the death of Jamal Sutherland in South Carolina have been fired.

Sutherland died back in January while he was in police custody, and body camera footage was released last week.

We want to warn you, the footage you're about to see may be hard to watch.

You can see deputies forcibly remove Sutherland from his jail cell. Deputies pepper spray him a few times, pin him to the ground, and tase him. The 31-year-old died shortly after the encounter.

The deputies say the man didn't want to leave his cell for a hearing. His family says he suffered from mental illness.

"Mental illness does not give anybody the right to put their hands on my child. That's my child. I love my child, his brother, and his fathers. They love Jamal," said Sutherland's mom, Amy Sutherland.

Sutherland was taken into custody on January 4th for a misdemeanor simple assault incident at a behavioral health center. His family says he should've been booked into the jail's medical center but was not because it was full. He died the next day.