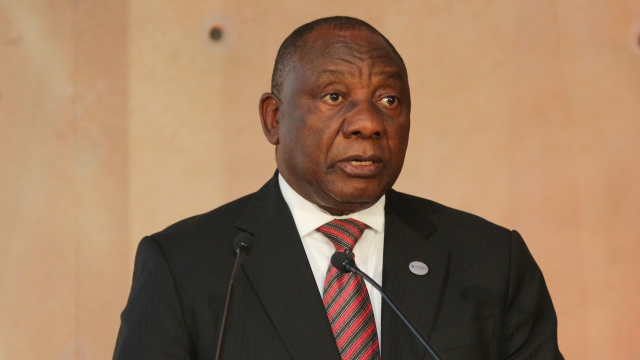 SMS
South Africa's President Vows To Rid Party Of Corruption
By Ahmed Jawadi
By Ahmed Jawadi
May 13, 2019
President Ramaphosa said the ANC "will do good by its people" ​and he promised not to appoint leaders who work "to fill their own pockets."
SHOW TRANSCRIPT

South African President Cyril Ramaphosa is vowing to end corruption within his own party.

Ramaphosa claimed victory Saturday as his party, the African National Congress, won South Africa's parliamentary elections. Despite the win, the ANC's 57 percent vote tally was its lowest in its 25 years in power. Turnout was also low at 65 percent, signaling voters' frustrations over government corruption and high unemployment.

During his victory speech Sunday, Ramaphosa said the ANC "will do good by its people" and promised he would not appoint leaders who work "to fill their own pockets."

Ramaphosa became the president in 2018 after predecessor Jacob Zuma stepped down amid corruption allegations.