At State Of The Union, Trump Makes Another Push For Infrastructure 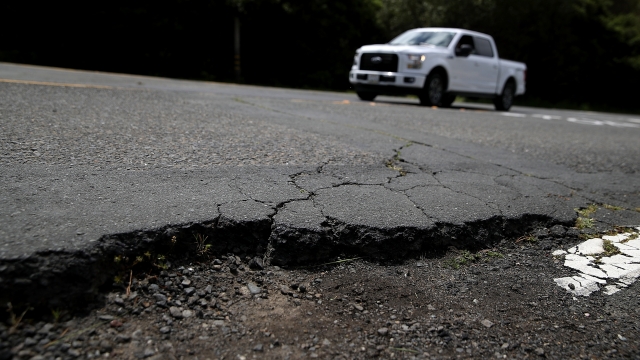 "I know that the Congress is eager to pass an infrastructure bill — and I am eager to work with you on legislation to deliver new and important infrastructure investment, including investments in the cutting edge industries of the future," President Donald Trump said at the State of the Union address. "This is not an option. This is a necessity."

Over the last three years, President Trump has promised improvements to the nation's infrastructure. But, so far, little has come of it.

Let's take a look back: In 2017, at his first address to Congress, President Trump asked lawmakers to approve a $1 trillion investment in infrastructure. The White House moved forward with a vision document later that year, but that's pretty much where it stopped.

In 2018's State of the Union address, President Trump asked for a $1.5 trillion bill for America's infrastructure investment, with every federal dollar being leveraged by state and local governments and even private sector investments. The White House went so far as to provide a blueprint with a commitment to $200 billion in federal money, but that plan failed after no lawmaker would take up the cause and turn it into a measure to send to Congress.

This year's address was much more vague than either one of the president's previous calls to action.

Politico reports the lack of details in the commander-in-chief's plan this year probably won't help spur Congress into action over the U.S.' infrastructure, much of which needs rebuilding. Last year, the American Society of Civil Engineers gave U.S. infrastructure a D+ rating, noting $2 trillion dollars is needed to reach a state of "good repair" nationwide.

After the State of the Union address, Chairman of the Transportation and Infrastructure Committee U.S. Rep. Peter DeFazio said he'd work on a bipartisan infrastructure package, but that he'd need help and support from the Trump administration to actually get something passed.

DeFazio also explained that the Highway Trust Fund — which uses money it received from fuel and other taxes to fund highway projects — faces a $1 trillion surface transportation investment gap over the next 10 years to fix current infrastructure, meet future needs and restore the U.S.' global competitiveness.

He said: "Any serious infrastructure proposal must provide sustainable, long-term federal funding so we can make these necessary investments, create millions of living-wage American jobs, increase economic growth, and decrease congestion and emissions."