Sorry, Milwaukee. They Need Your Bucks To Build A Stadium 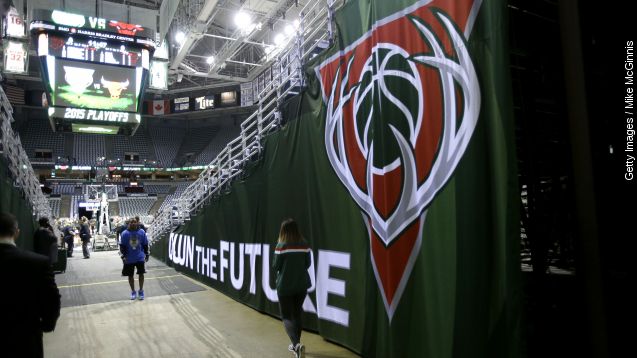 After the Milwaukee Bucks threatened to leave town, the team will now be getting a new stadium ... funded in part by $250 million in taxpayer money.

It appears the Bucks' threat to leave Milwaukee worked. The Wisconsin Senate approved funding for a new, $500 million arena for the team Wednesday.

"The urgency is real. Without a lease after 2017, we don't have a team," Metro Milwaukee Association of Commerce's Tim Sheehy told Newsy's partners at WTMJ.

On the surface, it sounds like great news for the city — keeping an NBA team in town, creating construction jobs and more. But dig a little deeper, and it's not so nice for the public.

Taxpayers will be on the hook for half the cost of the arena — $250 million.

This approval comes days after Wisconsin Governor and GOP presidential candidate Scott Walker cut more than $250 million from the University of Wisconsin system in what USA Today calls "the deepest in the history of Wisconsin's higher education." (Video via Milwaukee Journal Sentinel)

Walker's lobbied for the new arena in the past, arguing that building a new arena and keeping the team would benefit the economy.

"This is all based on growth. This is the ultimate free market, fiscally conservative approach going forward," Walker said in January.

It's the same argument used by the Bucks franchise:

"It spreads across the riverfront, up through Bronzeville and across the great state of Wisconsin."

Although countless studies have shown the stadiums and arenas have little to no long-term economic benefit.

To Walker's claim, Deadspin, a long time adversary of publicly funded stadiums, writes, "Of course, $250 million could be used to revitalize downtown Milwaukee in plenty of other ways than paying for an arena for billionaires."

"Between 2000 and 2010, we spent $12 billion building new facilities for professional teams. ... Sports teams are successful businesses with wealthy owners, and yet they still get our help."

Will it hurt Walker's bid for president? Probably not. But Wednesday's approval is just another notch on a long list of stadium deals the public will be paying for without much of a return on their steep investment.