Sony's Amy Pascal Steps Down, But Hack Might Not Be Why 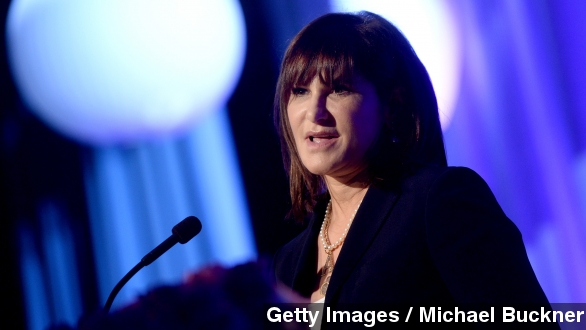 SMS
Sony's Amy Pascal Steps Down, But Hack Might Not Be Why
By Lauren Zima
By Lauren Zima
February 5, 2015
Amy Pascal is stepping down as co-chairman of Sony Pictures Entertainment. Is the Sony hack the reason for the move?
SHOW TRANSCRIPT

Amy Pascal is stepping down from her seat as co-chairman of Sony Pictures Entertainment. First reaction to these headlines: really? Now?

This comes months after the Sony hack scandal began and weeks after it pretty much wrapped up. If this was coming, we'd expect it to come in the midst of all that.

So, here's the key. The move might not have to do with the hack at all. Pascal is still going to work with Sony but only on producing. And she'll stay on as co-chairman through May.

Variety reports Sony is funding a production company for Pascal and will have worldwide rights to movies it makes.

Entertainment industry outlets are pointing out that Pascal had a long track record of success before the hack. She'd worked on films like "The Social Network" and "21 Jump Street" and was considered one of the industry's top execs.

The hack made Pascal, a behind-the-scenes person, into a household name, especially when emails between her and producer Scott Rudin came to light. They speculated about President Obama's favorite movies, and the emails were seen as racially insensitive. Both Pascal and Rudin apologized.

And many in Hollywood stood behind Sony, arguing the hack was just that — a hack, revealing personal exchanges that were never intended for public light.

Pascal released this statement: "I have spent almost my entire professional life at Sony Pictures and I am energized to be starting this new chapter based at the company I call home."