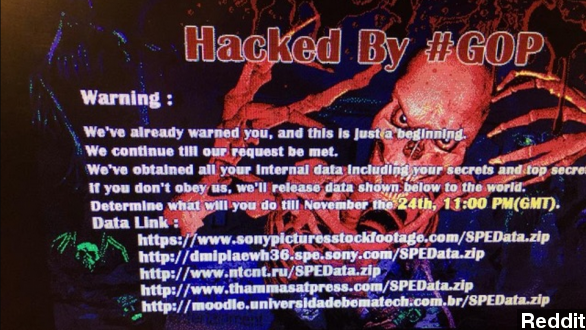 It sounds like the stuff of cheesy hacker films — a large corporation gets hacked and all its computers display a nefarious skull claiming its deepest secrets are at stake. Well, this is real, and it happened to Sony Pictures Entertainment Monday.

The hack first became apparent on Reddit when a now-deleted user account posted this unusual image, claiming it was from a friend who still worked at Sony Pictures. At the top of the image is the banner, "Hacked by #GOP."

As for who or what #GOP is, Bloomberg is saying it's a group calling itself "Guardians of Peace." So far, the only thing Sony has said is that it's investigating "an IT matter."

Along with some vague threats typical of corporate hacks these days, there are also a few download links to what looks to be two massive lists of files on a server — presumably Sony Pictures' server.

Although this all sounds pretty far-fetched, multiple outlets have received confirmation from Sony Pictures that yes, this is actually happening. Officially — like we said earlier — the company is simply referring to the hack as an "IT matter."

According to Deadline, work at the Sony offices worldwide has come to a standstill after the appearance of the skull image. A source tells the outlet, "We are down, completely paralyzed."

And another source tells The Next Web workers have been told to work from home since they can't even access the Internet at the office.

Strangely enough, the hack message said Sony had until 11 p.m. Greenwich Mean Time Nov. 24 to meet mysterious demands or else those secrets would be released. It's well past that time, and yet nothing seems to have happened.

Some folks on Reddit have theorized this either means Sony gave in to the demands, whatever they might be, or that it's perhaps a viral ad campaign by Sony to stir up publicity for something.

This isn't the first time Sony's been subject to hacks. In 2011 its PlayStation Network was hacked, exposing tens of millions of user accounts. (Video via IGN)

Sony Pictures was hacked in 2011 as well, when 37,000 accounts were exposed. Of course, if this hack is as big as it's claimed to be, Sony Pictures could be dealing with a much bigger headache.