Sondland: Trump Told Diplomats To Work With Giuliani On Ukraine 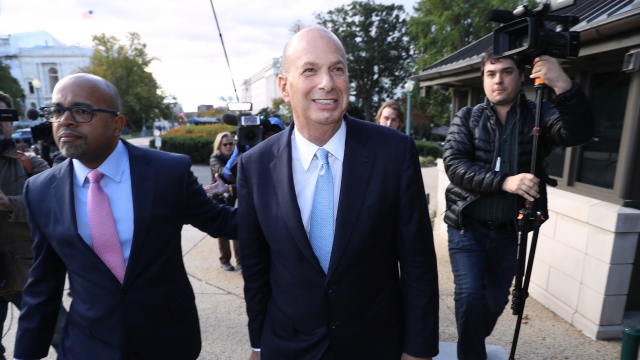 SMS
Sondland: Trump Told Diplomats To Work With Giuliani On Ukraine
By Briana Koeneman
By Briana Koeneman
October 17, 2019
That's according to a copy of Gordon Sondland's opening statement, obtained by several media outlets ahead of Thursday's deposition.
SHOW TRANSCRIPT

Gordon Sondland, the U.S. Ambassador to the European Union, said President Donald Trump directed him and other diplomats to work with his personal attorney, Rudy Giuliani, when it came to relations with Ukraine. Sondland spoke to three House committees on Thursday, and multiple news outlets obtained a copy of his opening statement.

Sondland said, just days after their return to the U.S., the delegation debriefed President Trump and other officials at the White House, and urged him to arrange a call and White House meeting with Zelensky.

But, Sondland said, President Trump was "skeptical that Ukraine was serious about reforms and anti-corruption," and he told the delegation to speak to Giuliani about his concerns.

Sondland said he was "disappointed" by the president's direction but ultimately agreed to follow his orders. He said he didn't understand until later that Giuliani's agenda might have included an effort to pressure Ukraine into investigating former vice President Joe Biden and his son, Hunter.

Sondland is considered a key witness in Democrats' impeachment inquiry against President Donald Trump. He and several other officials became entangled in the Ukraine controversy after text messages showed they had pressured Ukraine to investigate President Trump's political opponents.