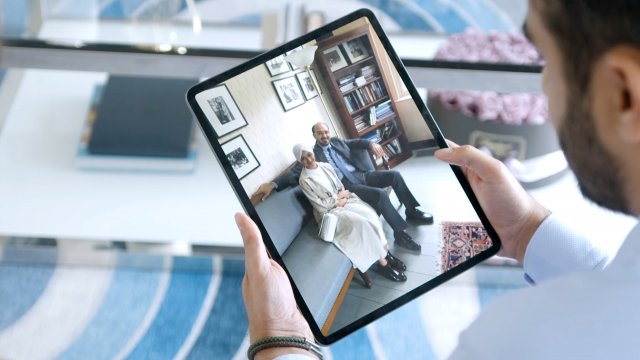 It’s been more than two years since Khalid Aljabri’s brother and sister vanished. The family says they’re being used as emotional blackmail against them. Omar and Sarah had tried to leave the kingdom of Saudi Arabia when Mohammed Bin Salman came to power in 2017. But under MBS, they couldn’t leave.

"We both graduated the same year from the same university, same class. He graduated law school and I graduated med school. Not in my wildest dreams would I have expected that this, you know, person who is a royal, who is reading our graduation speech, in ten years, he would be crown prince and his first victims would be my siblings, Omar and Sarah, who were 17 and 18," Aljabri said. "This was Sarah's birthday and it was March 6, 2020. This picture was taken ten days before they were kidnapped and disappeared. This is probably the last birthday she celebrated."

The Aljabri family story starts with their father, who was a top intelligence official under the previous crown prince. In shadows cast by September 11, Saad Aljabri helped build a Saudi security system that caught terrorists. U.S. Intelligence officials praised his work. And those close relations are why Khalid Aljabri says the crown prince wants his father dead.

"It's been an ongoing nightmare since, you know, 2017. And it evolved to the point where active hostilities to my family members became hostilities to U.S. national security interests," Aljabri said.

A Saudi state-owned company filed a lawsuit in the U.S. against the Aljabris, alleging the family stole billions through counterterrorism efforts. To defend himself, Aljabri’s father was faced with exposing classified details of how the U.S. hunts terrorists.

"The spook the world, they have a code of conduct like respect, trust, reliability. Imagine putting dad in a position where he has to unravel 15 years of that," Aljabri said.

President Biden’s top intelligence official intervened. Director of National Intelligence Avril Haines said Aljabri's defense could “cause serious, and in some cases exceptionally grave, damage” to U.S. national security. A judge dismissed the case but the Saudis appealed. Parallel litigation is unfolding in Canada, where Khalid’s father says Prince Mohammed tried to have him assassinated.

NEWSY'S SASHA INGBER: Your father in a complaint said that there was a hit squad that was dispatched by the crown prince to kill him in Canada.

KHALID ALJABRI: We were informed by Canadian security agencies that there was a team of Saudi intelligence officials and forensic experts that was thwarted at an airport.

The family says the hit squad came less than two weeks after Saudi agents and a forensic expert killed and dismembered Saudi dissident and journalist Jamal Khashoggi — which the U.S. intelligence community says was approved by the crown prince.

With President Biden planning to discuss counterterrorism in the kingdom, Aljabri also says the security system his dad helped construct is being misused.

"In September of 2015, just a few days before my father was dismissed, Mohammed Bin Salman approached him and asked him if he can use counterterrorism agencies to kidnap a dissenting other royal somewhere in Europe. My father refused and said, ‘this is not why these agencies were created, they were created to save people's lives, not to destroy them.’ Mohammed Bin Salman got pissed. My father was, you know, fired a few days later. And Mohammed Bin Salman formed his mercenary team, quote unquote, tiger squad. All I can say is over 15 years of an honest counterterrorism partnership between the U.S. and Saudi Arabia, post 9/11, which salvaged the relations post 9/11, there was a lot of training, a lot of equipment, a lot of intel sharing, a lot of responsibility sharing that made Saudi Arabia's counterterrorism agency so good to the point they were thwarting terrorist attacks even on U.S. soil. That accumulation of expertise, equipment, personnel is now all under the hands of MBS who only cares about going after dissidents," Aljabri said.

INGBER: Are you saying that the Saudi's are not prioritizing catching terrorists now?

ALJABRI: Absolutely. And I'll give you an example. It's not a coincidence that the first Al-Qaeda terrorist attack on U.S. soil after 9/11 happened under MBS' watch.

He’s talking about a 2019 shooting at naval air station in Pensacola, Florida. It left three sailors dead. The FBI found the gunman, a member of the Royal Saudi Air Force, was linked to Al-Qaeda.

"Had the Saudi counterterrorism agencies been doing what they historically used to do, which is now fighting terrorism, 3 U.S. servicemen would have celebrated the Fourth of July this year," Aljabri said.

Aljabri flips through old photos of his fathers’ travels to Washington: The days before the threats and the abductions.

"This is the former crown prince who's disappeared. This is one of my dad's assistants. He's also disappeared," he said.

Many of those who haven’t disappeared in these pictures have sworn allegiance to the crown prince.