Some Young Americans Aren't Fans Of The US' Foreign Policy 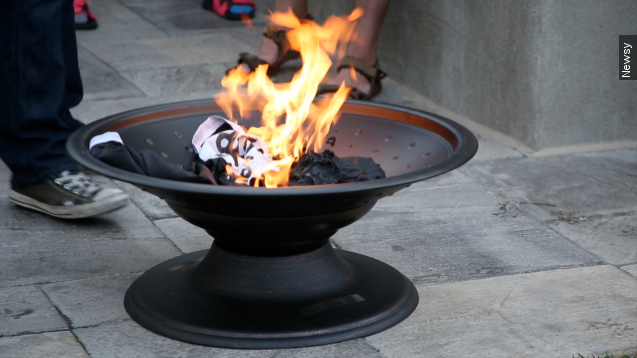 Students at the University of Missouri burned an ISIS flag Thursday.

The demonstration was protesting ISIS, but also U.S. interventionist policy in the Middle East.

"Each time we have toppled a secular dictator in the Middle East, chaos has ensued. And this can be seen, for example, in the countries of Iraq and Libya. ... Today, your legislators are attempting to create another power vacuum such as these, in what I consider a blatant lie," one protester said.

He’s not the only one who thinks the U.S. should stay out of the Middle East.

A Pew Research Center poll from early 2015 showed that young Americans don't support U.S. military action against ISIS in Iraq and Syria nearly as much as Americans ages 30 or older.

Overall, American sentiment is a little different. Both the Pew poll and a July Brookings poll found that Americans are generally in favor of a more forceful U.S. foreign policy.

Even though a U.S.-led coalition has been dropping bombs on ISIS targets for more than a year, the group is still making gains in parts of Syria. (Video via U.S. Central Command)

And an effort by the U.S. military to train and equip moderate rebels in northern Syria was canceled after numerous failed attempts at establishing the rebels. (Video via Al Aan TV)