Trump's Not As Tough On Russia As He Says 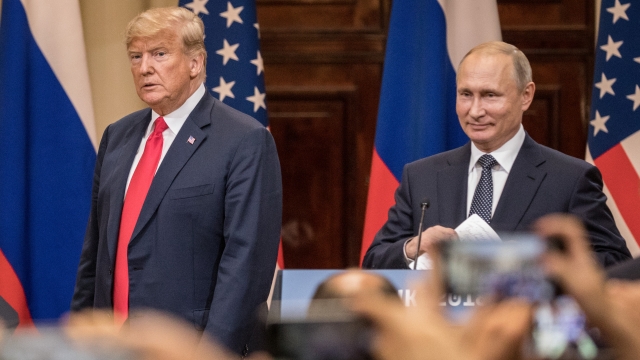 SMS
Trump's Not As Tough On Russia As He Says
By Matt Picht
By Matt Picht
January 14, 2019
Several of President Trump's foreign policy stances line up with the interests of Russian President Vladimir Putin.
SHOW TRANSCRIPT

Trump told reporters, "Not only did I never work for Russia, I think it's a disgrace that you even asked that question."

And he often claims his administration has been even tougher than his predecessor when it comes to Russia. But throughout his presidency Trump has often pursued policies that do end up playing out in Russia's favor.

The most recent example of this is Trump's pledge to withdraw U.S. troops stationed in Syria. That policy falls in line with the president's longtime criticism of U.S. military engagements overseas.

But Russia also has forces in Syria supporting the country's government: they'll have a freer hand in the region if the U.S. fully withdraws. 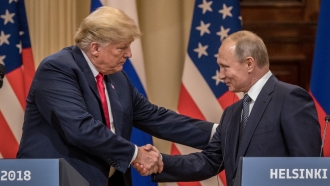 Trump's skepticism of U.S. engagement has also led him to lash out at NATO allies for underspending on defense. Tensions within NATO are a general boon to Russia, which views the alliance's expansion as a dire threat.

And the president's ire at the Russia investigation, which has ensnared members of his presidential campaign, could end up hindering the U.S. understanding and prevention of Russian interference in future elections.

The president and his defenders point to a number of actions the administration has taken against Russia, the biggest of which was a slew of economic sanctions. However, those were mandated by Congress in 2017, and the the Treasury has since taken action to roll some of the penalties back.

Trump has touted the success of U.S. energy exports — which cut into Russia's own massive energy sector — as proof that he's not connected to the Kremlin.

The White House has also taken unilateral action against Russia. The Trump administration has sold weapons to the Ukrainian government for its fight against pro-Russian separatists, and expelled a host of Russian diplomats in retaliation for the poisoning of a Russian double agent living in the U.K.