Will Oregon Vote To Create A Greater Idaho? 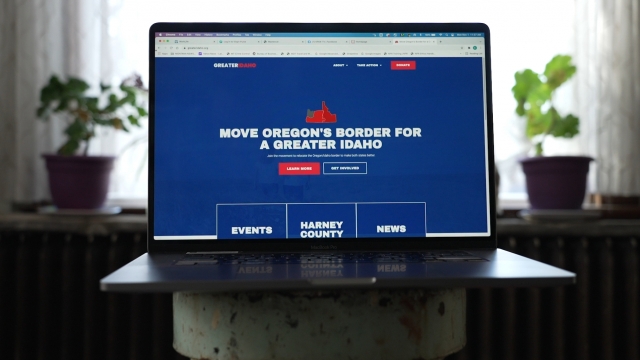 SMS
Will Oregon Vote To Create A Greater Idaho?
By Maritsa Georgiou
By Maritsa Georgiou
November 2, 2021
First, both state legislatures would need to approve it. Then, so would Idaho voters. Finally, it would head to Washington for congressional approval.

Some might call it an identity crisis. There's a grassroots effort happening right now in rural Oregon to get representation that better aligns with their way of life.

Some might think to get more involved in the political process or move. But one group says: "Why move when you can move the state border instead?"

"The ultimate goal, this next legislative session, both in Oregon and Idaho, is to get them talking about it and trying to get them to come together and talk about it," said President of Citizens for Greater Idaho Mike McCarter.

He's talking about carving out a huge chunk of Oregon and including it in Idaho's boundary. The measure on the ballot in tiny Harney County, Oregon, is more symbolic. It wouldn't change the shape of Idaho or Oregon, but it would require county leaders to discuss the possibility.

"We have worked for over 20 years trying to get a better balance in Oregon so that rural Oregon is represented better, and it's gone the opposite direction," McCarter said. "So we have to look outside the box and say, 'OK, what can we do now?'"

So is this actually a possibility? It means a lot of logistical hoops. First, both state legislatures would need to approve it. It would go then to Idaho voters for an OK, and then it would head to Washington, where it would need congressional approval.

"I'll be curious to see how this Greater Idaho movement plays out," said constitutional law professor Shaakirrah Sanders. "If it's successful, then I think we'll see a Greater New York, a Greater California and maybe we'll just have big regional spots of the country instead of 50 states. So how our flag will look after that will be curious to me, but we'll see how this plays out."

Leaders of the Greater Idaho movement know that even as these counties take up these measures, the Oregon legislature could kill it on arrival. But they say they're still accomplishing something if that happens.

"It sends the word to the Oregon legislature that you've got a problem with rural Oregon. Now, if you really desire to pull this state together, to work together, then let's start talking about it," McCarter said.

Newsy spoke with Harney County's elections administrator Tuesday. He said there are about 5,600 registered voters in the county and that they had a 38% turnout at last check.

The results of whether the measure passes is expected when the polls close Tuesday.