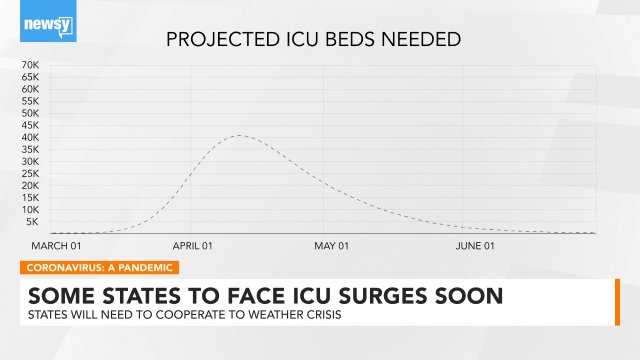 SMS
Some States Are About To Face Surges Of ICU Patients
By Mark Fahey
By Mark Fahey
April 2, 2020
Models suggest some hard-hit states could see coronavirus cases peak within weeks; others may not peak until May.

The coronavirus pandemic in the United States will peak in just 13 days.

That's according to an independent model that was cited this week by the White House.

“I mean, we have grave concerns when you look at the model. As I told you, look at the Chris Murray model, where he shows rapid escalation. And you can see it happening with the people we're losing every day throughout the — throughout America,” said Dr. Deborah Birx, the coronavirus response coordinator for the White House in a press conference in the Rose Garden.

The model also predicts that new severe cases could begin to outnumber hospital beds this week.

About 20,000 patients will need ICU beds that don’t currently exist, and 94,000 people will die in the next four months. But this storm will not hit all parts of the country on the same day or to the same degree.

According to the model created by the University of Washington’s Institute for Health Metrics and Evaluation, states that have already been hit hard like New York, New Jersey and Michigan will peak as early as next week. But others, like Kentucky, Missouri and Florida, won’t face their peaks until May.

And the model predicts that 11 states will not face an ICU shortage during this crisis at all, assuming they start or continue to enforce social distancing and other measures. Six others will be facing shortages of over 1,000 ICU beds.

In New York, where the virus has hit the hardest in the U.S., there will be a shortage of over 10,000 beds.

Certain states are going to have to face the problem much earlier and what we have seen in New York is an experiment, unfortunately, for New York or for people in New York,” said Dr. Ali Mokdad, IHME senior faculty. “Big cities and other states will face the same issues and they have to be ready for it."

That’s Ali Mokdad, a senior faculty member for the research center that created the model and a former CDC official. He said the way to reduce casualties will be for resources to move between states as they’re needed, and for patients to be moved by air like in Europe.

“What are the needs? And when do you need them? That's the most important part, is when do you need a ventilator? And if you needed it before somebody else, maybe when we get a new ventilator, you get it first,” said Mokdad. “There are a lot of resources in this country. They may not be in the right place at the right time.”

“We're the ones who are hit now,” said Cuomo in a press conference earlier this week. “That's today, but tomorrow it's going to be somewhere else, whether it's Detroit, whether it's New Orleans, it will work its way across the country. And this is the time for us to help one another.”