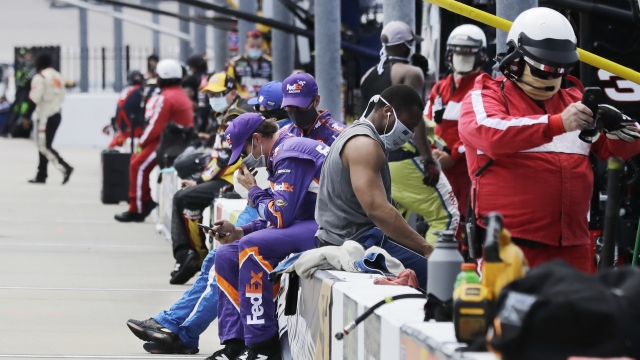 SMS
Some Sports Restarted This Weekend, Most With Empty Stadiums
By LeeAnne Lowry
By LeeAnne Lowry
May 18, 2020
Germany's Bundesliga league and NASCAR returned this weekend, along with a charity golf tournament in Florida.
SHOW TRANSCRIPT

Stadiums around the globe have been vacant for months as leagues grapple with COVID-19. But this weekend, there were some new signs of life in the sporting world.

Germany's Bundesliga soccer league played games on Saturday for the first time since early March, becoming the first major European soccer association to return to action. Typically these matches have tens of thousands of fans in the stands, but people are currently barred from the games. All six matches were broadcast for people to watch at home.

And in South Carolina, NASCAR returned on Sunday to an empty Darlington Raceway. The stock car racing league's revenue is largely driven by broadcast deals, so restricting fans doesn't hurt its bottom line as much as sports that rely more on ticket sales.

On the links, golf temporarily returned in Juno Beach, Florida, where a charity tournament raised money for coronavirus relief efforts. And we could see more golf soon: the PGA Tour last week laid out plans to resume June 11.

Prior to these sports relaunching — as many U.S. sports fans craved their usual leagues — some turned to Korean Baseball, which restarted earlier this month and is airing on ESPN.

With these restarts, the hope is that safety precautions prove to be adequate and provide a roadmap for other leagues to return. The fear is that even with safety precautions, resuming sports could lead to new outbreaks. That could end up being a setback for sports getting back to normal, and even put lives at risk.