An Oprah 2020 Presidential Run Might Not Be That Far-Fetched 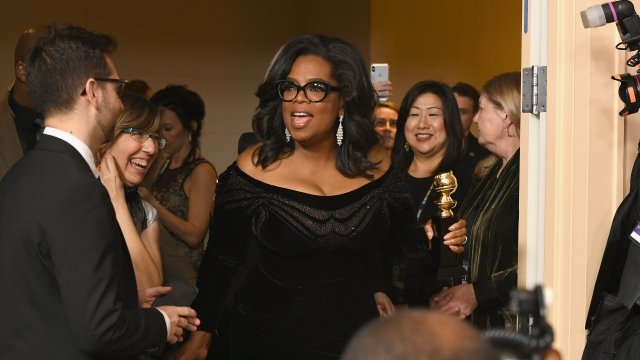 SMS
An Oprah 2020 Presidential Run Might Not Be That Far-Fetched
By Katherine Biek
By Katherine Biek
January 8, 2018
Oprah Winfrey's rousing call to action at the 2018 Golden Globe Awards incited speculation that she might run for office in 2020.
SHOW TRANSCRIPT

Host Seth Meyers joked about Oprah Winfrey running for president in his monologue at the 2018 Golden Globe Awards, but his statements might not be that far-fetched.

Two unnamed sources who are reportedly close friends with Winfrey told CNN that the former talk show host is "actively thinking" about running for office.

While accepting the Cecil B. DeMille award Sunday night, Winfrey gave a rousing speech that also acted as a call to action in the wake of the #MeToo movement.

Afterward, her longtime partner Stedman Graham told the Los Angeles Times Winfrey "would absolutely" run for office if the people wanted her to.

Of course, nothing is official yet. As of Monday morning, Winfrey hadn't commented on the speculations about a 2020 presidential run.