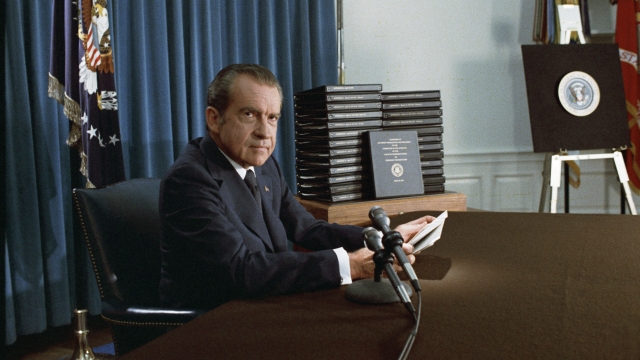 SMS
Why Is Donald Trump Being Compared To Richard Nixon?
By Katherine Biek
By Katherine Biek
May 10, 2017
Lawmakers started using the word "Nixonian" on Tuesday after FBI Director James Comey was fired.
SHOW TRANSCRIPT

"It certainly is 'Nixonian' in its air and quality and tone," Sen. Richard Blumenthal said on CNN.

Now, it's important to point out Nixon never fired an FBI director; the Richard Nixon Presidential Library and Museum wants to make that clear.

But some are likening Comey's firing to the "Saturday Night Massacre," which became a turning point of the Watergate investigation in 1973.

On that day, Nixon ordered the firing of special prosecutor Archibald Cox. Cox was leading the investigation into the Watergate burglary and had subpoenaed audio recordings of Oval Office conversations. We now know some of those tapes implicated Nixon in the Watergate scandal.

Attorney General Elliot Richardson and Deputy Attorney General William Ruckelshaus refused to comply with Nixon's order and resigned in protest. This led to the day being called a "massacre."

Critics say the two firings are similar because the FBI is currently investigating a possible connection between Trump's presidential campaign and Russia.

Before Trump, Bill Clinton was the only president to fire the head of the FBI. He did that in 1993, after William S. Sessions refused to step down amid ethics violations.