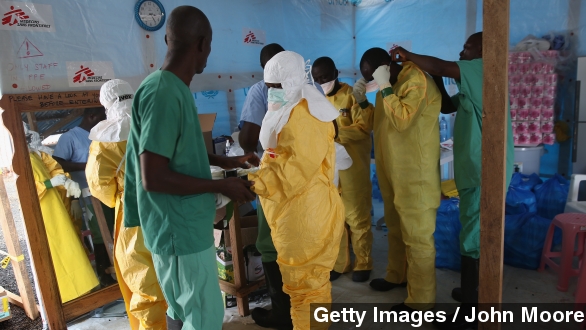 By Matt Moreno
September 30, 2014
The CDC says a new case of Ebola has not been reported in Nigeria for more than 21 days, leading to hopes the outbreak might be nearing its end.
SHOW TRANSCRIPT

Finally, there's a hint of good news regarding the deadly Ebola disease.

A new Centers for Disease Control and Prevention report on Ebola in Nigeria released Tuesday says, "No new cases had occurred since August 31, suggesting that the Ebola outbreak in Nigeria might be contained."

Elsewhere on the CDC's website, the health institute also writes, "Nigeria and Senegal have not reported any new cases since September 5, 2014, and August 29, 2014, respectively." — different dates than reported in the CDC's release just a day later.

And the timeline is important. The CDC says those who suspect they have Ebola should be medically monitored for 21 days. Since no cases have been reported in the area since the beginning of the month at the latest, it appears the spread of the disease could be coming to an end in the region. (Video via Euronews, BBC)

But, as PBS reports, it's not necessarily all good news.

DR. FAISAL SHUAIB: "We've had record levels of people surviving the Ebola virus disease and they might start feeling, 'Well, maybe this is the place to come.'"

The Ebola outbreak started in March of this year and has spread through much of West Africa, with the countries of Guinea, Sierra Leone and Liberia being some of the hardest hit.

President Obama, among other world leaders, spoke at an emergency U.N. meeting on Ebola last week.

PRESIDENT OBAMA VIA THE WHITE HOUSE: "The Ebola virus is spreading at alarming speed. ... If ever there were a public health emergency deserving an urgent, strong, and coordinated international response, this is it."

Already, at least 3,000 people have died due to the disease, and estimates by health experts say, if not contained, at least half a million people could be infected in just a few months.