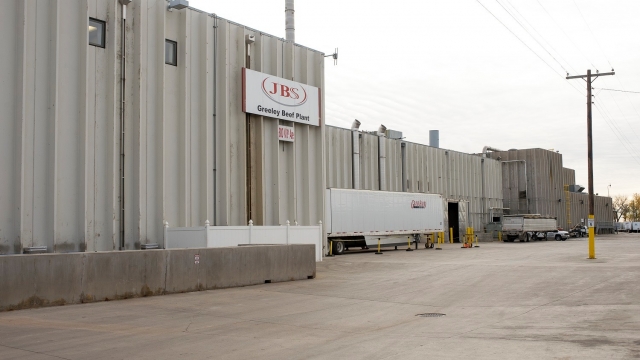 SMS
Some Meat Processing Plants Have Shuttered As Workers Catch COVID-19
By LeeAnne Lowry
By LeeAnne Lowry
April 9, 2020
JBS USA and Tyson are two major companies that have had to shut down facilities.
SHOW TRANSCRIPT

Most food companies are continuing to operate amid the pandemic, but some major meat packers across the U.S. have temporarily shuttered plants as workers catch the coronavirus.

JBS USA halted production due to managers showing symptoms at a massive facility in Pennsylvania. It plans to reopen April 16 — two weeks after it shut down. It says it needs that time to make sure there's management in place before resuming operations.

Employees at another JBS facility in Colorado went on strike this week due to lack of protective measures after workers there tested positive for the virus.

And Tyson — one of the world's largest meat processors — suspended operations at a plant in Iowa this week when two dozen workers were diagnosed with COVID-19. Reuters reports the facility is responsible for about 2% of the country's total slaughtering capacity. Livestock that were headed to the plant are being diverted to its other facilities.

These shutdowns haven't affected the nation's meat supply, but there's concern there could be shortages if more plants have to stop operating.