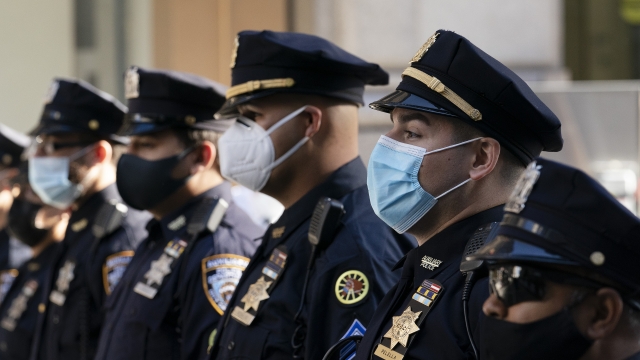 New York is the latest city to require police officers, firefighters and other city workers to get vaccinated or be placed on unpaid leave.

New York is the latest city to require police officers, firefighters and other city workers to get vaccinated or be placed on unpaid leave with no testing out option.

The city says some 71 percent of workers impacted by the mayor's mandate have already gotten at least one shot.

The city is also offering a $500 incentive for workers who get their first shot at a city-run vaccination site by the end of the month. But some New York police officers continue to defy the vaccination push and unions representing them are already threatening lawsuits.

Chicago's police superintendent says the COVID virus is "no different than the gunfire" they take as cops and it goes against their oath to take the virus into people's homes. As of Tuesday, 21 police officers have been put on 'no pay' leave after defying the city's order to disclose their COVID vaccination status. According to the police superintendent - the refusals to comply have not affected staffing. Chicago's mayor has accused the police union of spreading misinformation, while the union's president claims the mandate violates both the officers' constitutional rights and the union's contract with the city. Both sides have taken the issue to court.

In Washington State, 127 employees have left the state Patrol over the governor's vaccine mandate the mandate applies to most state employees, including long term care workers, teachers and school staff. It was not immediately known how many people in the patrol patrol agency were fired or quit on their own.