Some House Dems Are Inching Toward Impeachment 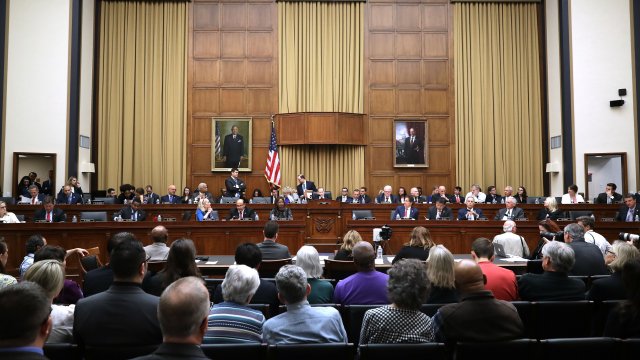 Less than two weeks after Attorney General William Barr was held in contempt of the House Judiciary Committee, the White House rejected its documents request. Members on the committee say the White House's actions could be inching the body towards opening impeachment proceedings.

"If things continue the way they are, inevitably we're going to launch an impeachment inquiry. And the sooner the better," said Rep. Jamie Raskin.

Raskin says the Supreme Court has explicitly stated Congress has the power to ask for these kinds of documents.

"This is what Congress does. No administration likes it, but they have to comply with it," said Raskin. "That's unprecedented to have a president pull a curtain down over an entire branch of government and then order his subordinates not to turn over documents, not to testify and not to turn over witnesses."

Rep. Madeleine Dean says by defying the subpoenas of various committees, the president is obstructing justice in itself.

"He's driving this train faster toward impeachment," Dean said. "It's obstruction of our oversight role. We are a co-equal branch of government. I don't think he's ever grasped that."

The Judiciary Committee is hoping to hear from former White House counsel Don McGahn next week and the special counsel himself soon after. Some Republicans in Congress have been vocally supportive of the administration ignoring these kinds of requests.

"It's shameful that we have Republicans in Congress that are undermining the legislative branch. They are elevating their party allegiance over the oath to defend the separation of powers and defend congressional investigations," said Raskin.

A senior White House official says Judiciary Committee Chairman Jerry Nadler needs to set out a legitimate legislative purpose for the documents he's requesting and that they'll only comply with requests they believe are legitimate oversight of the executive branch.

The official broke from the typical comments coming from the president, calling the probe a "witch hunt" run by Democrats. Instead, they said the Mueller investigation was "well-funded by the taxpayers, staffed by aggressive investigators and far-charging attorneys who know what they're doing. The investigation has been done and done thoroughly."

Current White House counsel Pat Cipollone sent a 12-page letter to Nadler saying in part, "Congressional investigations are intended to obtain information to aid in evaluating potential legislation, not to harass political opponents or to pursue an unauthorized 'do-over' of exhaustive law enforcement investigations conducted by the Department of Justice."

The letter is just another addition to the rapidly intensifying hostility between the two sides. But Raskin and Dean say before impeachment proceedings could even start, Democrats must weigh the potential consequences.

"It's not an easy decision, but the president's defiance of Congress and continuing destruction of the legislative process is making it easy for people to think about," Raskin added.