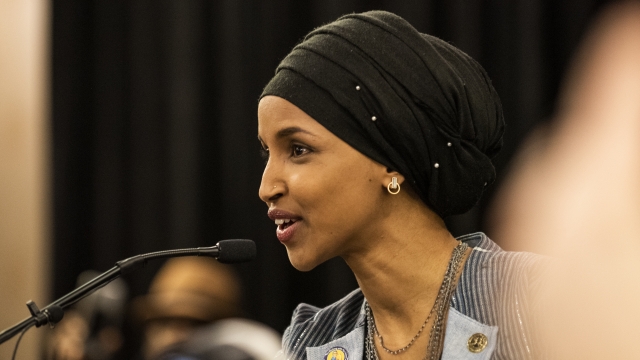 SMS
Let's Bring Context To The Ilhan Omar Anti-Semitism Controversy
By Ben Schamisso
By Ben Schamisso
March 8, 2019
Rep. Omar suggested that supporters of Israel harbor dual loyalty to Israel and the U.S. Here's why her comment created such an uproar.
SHOW TRANSCRIPT

Rep. Ilhan Omar / (D) Minnesota: "I want to talk about the political influence in this country that says it is OK for people to push for allegiance to a foreign country."

Last week, Rep. Ilhan Omar suggested that supporters of Israel harbor dual loyalty to Israel and the U.S. And that's sparked a controversy that has dominated Capitol Hill all week.

At the center of it all is this one question: Is Omar's view anti-Semitic, or is it a valid criticism of Congress' relationship with Israel?

It's true, after all, that Congress has long been a staunch supporter of Israel. And pro-Israel lobbies from inside and outside the U.S. are truly influential.

Rep. Alexandria Ocasio-Cortez / (D) New York: I think that things came down on her a little too hard.

Omar and her defenders argue that she's being unfairly cast as anti-Semitic because she's a vocal critic of Israel.

But here's the tricky part: Anti-Israel opinions and anti-Semitism can be two sides of the same coin.

A leading expert on anti-Semitism told Jewish Insider that Omar may really believe "she is only criticizing Israel and its policies, but one cannot ignore the fact that she is relying on traditional anti-Semitic tropes to do so."

Writing for The Atlantic, Chicago Mayor Rahm Emmanuel, who is Jewish, said the "foreign allegiance" trope Omar used casts "Jewish Americans as the other." And that, Emmanuel said, associates Omar "with calamities from the Spanish Inquisition to the Russian pogroms to the Holocaust."

Rep. Ted Deutch / (D) Florida: "Why are we unable to singularly condemn anti-Semitism? Why can't we call it anti-Semitism and show that we've learned the lessons of history?"

Omar has caused similar stirs twice in the past with criticisms of Israel that some deemed anti-Semitic. She apologized both times.

But in the eyes of her supporters, many Jews included, the Minnesota Democrat has been right all along. In an open letter of support, some pro-Palestinian Jews wrote that Israel "militarily besieges, economically chokes, and incessantly dispossesses the Palestinian people ... with the full backing of the United States government."

And that's why the letter's authors thanked Omar for shaking up the "congressional taboo against criticizing Israel."