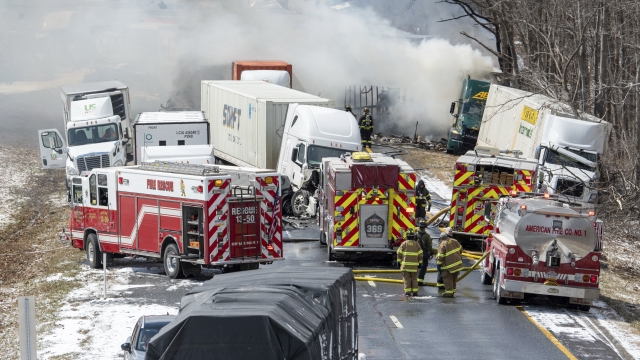 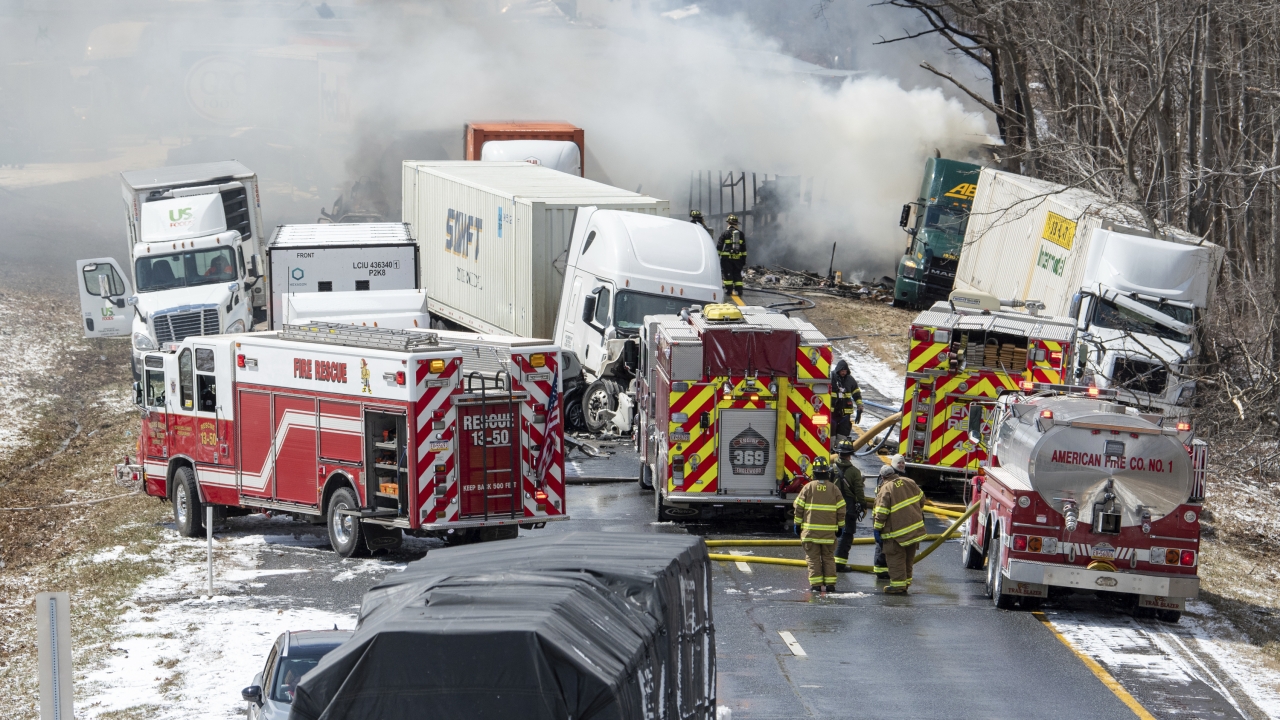 A collision involving more than 40 vehicles closed a portion of Interstate 81 in Pennsylvania and sent more than a dozen people to area hospitals on Monday, according to the Schuylkill County Office of Emergency Management.

The crash in northeast Pennsylvania happened around 10:30 a.m. and John Blickley, the deputy emergency management coordinator for the agency, said officials believe a snow squall clouded visibility and likely contributed to the accident. About 40 vehicles including multiple tractor trailers were involved in the initial crash, he said.

No fatalities had been reported to the Schuylkill County agency, but Blickley said emergency personnel from four different counties responded and took about 20 patients to area hospitals for treatment. The county coroner's office did not return requests for information about any fatalities.

Blickley said three tractor trailers carrying unknown cargo were on fire when emergency personnel responded. Smaller fires broke out out in other vehicles as well but all had been largely brought under control, he said.

Pennsylvania State Police Trooper David Beohm said Monday afternoon that he could not confirm any fatalities but he said police haven't been able to investigate because a fire was still burning among a number of crashed cars and trucks. He estimated a total of 50 to 60 vehicles were involved in the crash, including some tractor trailers and a number of smaller vehicles.

"We can't do anything while there's still an active fire going, and fire (officials) say it will probably be another one to two hours until they get it extinguished," Beohm said.

Many fire units were at the scene, including a number or tankers coming to replenish water because there was no water source from hydrants on scene.

People whose vehicles were in the crash and the "walking wounded" were taken to the Wegman's distribution center in an industrial park near the crash, he said, and a reunification center had been set up at the Goodwill Fire Company in Minersville.

Footage uploaded to social media on Monday showed a tractor-trailer smash into a large dump truck, turning it nearly 180 degrees. Another large truck spewed black smoke and orange flames into the air and an SUV struck a passenger car sending the sedan spinning, narrowly missing its driver who stood on the shoulder of the highway shrouded in snow and fog.

The person who posted the video did not immediately respond to requests seeking additional information. People off camera can be heard yelling as the cascade of crashes unfolds with multiple vehicles colliding in less than a minute.

"The squalls will quickly reduce the visibility to under one-half of a mile and coat the roads with snow," forecasters said, urging drivers to get off the road if possible or turn on hazard lights "and gradually slow down to avoid a chain reaction vehicular accident."

Mike Colbert, a forecaster with the National Weather Service office in State College, said the weather service started issuing warnings for snow squalls a few years ago, and pileups of the kind being reported were the reason they began doing so.

"They are very heavy snow showers where if you are driving into them, you can go from partly cloudy or sunny skies into an instant blizzard in a matter of seconds. That's why they are so dangerous," he said.

Blickley warned that the northbound section of the interstate will likely be closed "well into the evening" as the crash investigation and clean up continues. He also cautioned that more squall warnings are expected throughout the afternoon and asked people to be careful and pullover if needed.