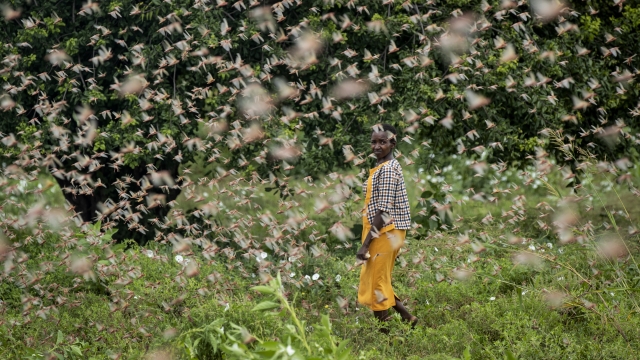 SMS
Somalia Declares National Emergency Over Locust Invasion
By Antoinette Miller
By Antoinette Miller
February 3, 2020
The country already struggles with food security, and the U.N. says if the swarms grow that Somalia could face a food crisis it "can't afford."
SHOW TRANSCRIPT

Somalia is just one of several East African countries to be hit with swarms of desert locusts in recent months — but it's now the first to declare a national emergency over the invasion. U.N. officials say if the swarms get any larger before the harvest season, Somalia risks a food crisis it "can't afford."

According to the United Nations' Food and Agriculture Organization, the desert locust is the most harmful crop pest: A swarm as small as one square kilometer can eat the same amount of food in one day as 35,000 people. That's especially bad news considering Somalia already struggles with fragile food security, and that crop season is approaching.

The U.N. says this current invasion of locusts is called an "upsurge", meaning an entire region has been affected. If the invasion can't be contained for more than a year, it will become a "plague" of locusts.

Several countries in Eastern Africa, including Ethiopia and Kenya, have also seen alarming numbers of locusts. Current swarms could start hatching eggs in February, which means new swarms could form in April. They have the potential to spread to other countries including Sudan and Eritrea.

The U.N. says it's requesting $76 million to support "rapid control operations" for the affected countries. An FAO official said there's no time to waste "because the locusts don't wait — they will come and they will destroy."