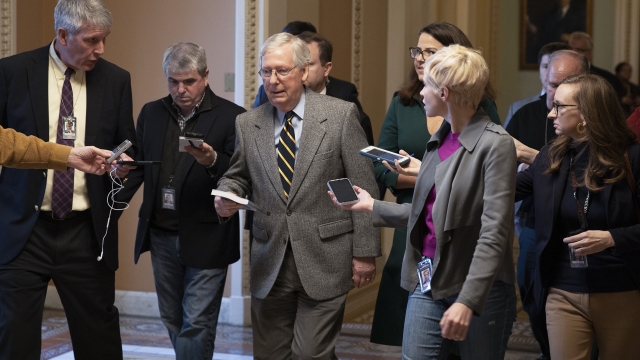 SMS
Soleimani Killing Draws Praise, Outcry On Capitol Hill
By Kellan Howell
By Kellan Howell
January 3, 2020
Many members of Congress support the killing of a top Iranian military commander, but worry the move could have unintended consequences.
SHOW TRANSCRIPT

A U.S. military strike that led to the death of one of Iran's top military commanders is drawing a wave of reactions on Capitol Hill. While most lawmakers say they support the killing of a U.S. adversary, others are questioning whether the move could have unintended consequences.

"My concern is all that anger and frustration that was directed at Iran, after this kind of action taken on Iraqi soil, will that anger and frustration now be directed at the United States? Will the Iraqi Parliament try to kick America out of their country because the action took place on Iraqi soil? These are the kind of questions that I'm not sure the administration has fully thought through," said Virginia Sen. Mark Warner, the top Democrat on the Senate Intelligence Committee.

Massachusetts Congressman Seth Moulton, an Iraq war veteran, saying in a statement: “[Qassem Soleimani] was an enemy of the United States with American blood on his hands. But the question we’ve grappled with for years in Iraq was how to kill more terrorists than we create. That’s an open question tonight as we await Iran’s reaction to Donald Trump’s escalation, which could ignite a regional war, with still no strategy from the Administration.”

The Pentagon is deploying 3,500 troops to the Middle East in response to rising tensions after the strike in Baghdad. The U.S. Embassy in Iraq is also telling Americans to evacuate.

Democrats and a handful of Republicans are also criticizing President Trump for not consulting members of Congress before ordering the strike.

"This is a very significant action, I wish they had treated this with the level of seriousness that prior administrations, Democrat or Republican, had treated these kinds of international incidents with," Warner told Newsy.

Virginia Democratic Sen. Tim Kaine said he has introduced a resolution to prevent the president from starting a war with Iran, tweeting, "The President wants to pretend that Congress doesn't exist, but it's our clear Constitutional duty to debate and vote before allowing him to rush into an unnecessary war."

Most in the GOP,  however, are pushing back on those criticisms.

North Carolina Republican Congressman Mark Meadows tweeting, "This 'Democrats weren’t notified' talking point purveying media is totally absurd. I was a member of Foreign Affairs for 6 years. I never got notified of something like this.When you have a chance to take out a terrorist leader plotting against Americans, you do it. Period."

Senate Majority Leader Mitch McConnell warned his colleagues not to jump to conclusions, saying they will be briefed on the situation next week.

"I recommend all senators wait to review the facts and hear from [the White House] before passing much of a judgment on this operation and its potential consequences," McConnell said during floor remarks.