Solar Storm To Hit This Weekend, Scientists Not Worried 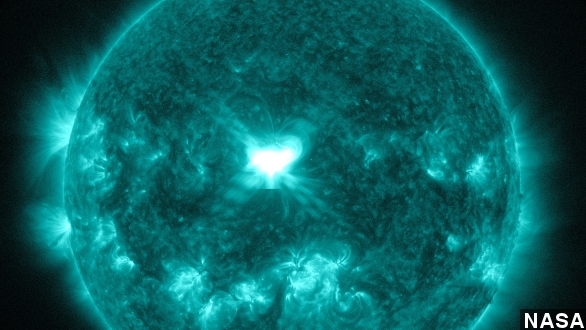 SMS
Solar Storm To Hit This Weekend, Scientists Not Worried

By Steven Sparkman
September 11, 2014
Two solar flares which erupted in our direction this week will arrive this weekend. The resulting solar storm will be powerful but not dangerous.
SHOW TRANSCRIPT

A solar storm is headed our way after the Sun produced a pair of solar flares aimed at Earth over the past couple days.

One of the flares, which occurred Wednesday afternoon, is considered an X-class, the most severe kind. They can sometimes interfere with communications and the power grid, but scientists say they're not worried this time. (Video via NASA)

KELLY BEATTY VIA THE WEATHER CHANNEL: "We're not really sure what's going to happen. Chances are there won't be any big effects from this one like disruptions of power. That's not going to happen."

You might remember Earth got hit by another back-to-back solar flare in June.

But if it seems like we're seeing a lot of these events lately, it might surprise you to know the Sun is actually being quieter than scientists expected.

The Sun has an 11-year activity cycle, and it was supposed to hit its "solar maximum," a period with lots of sunspots and flares, last summer.

Now, after a year-long delay, it's finally reached what NASA is calling a "mini-max," but it's still not a very big one.

"In the historical record, there are only a few solar maxima weaker than this one."

Of course, solar storms aren't all bad. They do cause the spectacular northern and southern lights. This round's display will be visible as far south as Pennsylvania.

The upcoming solar storm will arrive this weekend, not that you're likely to notice. One NOAA space-weather researcher claims we could see a few more big solar flares before the sun's activity starts to wind down again in 2015.