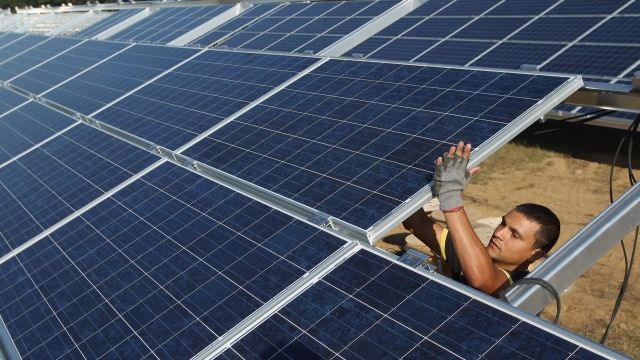 SMS
Solar Energy Is Now Cheaper Than Fossil Fuels
By Lindsey Pulse
By Lindsey Pulse
December 26, 2016
The World Economic Forum estimates solar and wind are now the same price or cheaper than fossil fuels in more than 30 countries.
SHOW TRANSCRIPT

Here's one good thing to come out of 2016 — solar energy is finally cheaper than fossil fuels.

The World Economic Forum estimates that in over 30 countries across the globe, solar and wind are now the same price or cheaper than fossil fuels. And more countries are expected to join those ranks.

Solar energy has come a long way. About a decade ago the average cost of generating a megawatt-hour of solar energy was $600 — now it hovers around $100, the same average price of coal.

Plus, wind and solar are attracting more and more investors; renewable energy trumped fossil fuel investments globally for the first time in 2015.

Despite these strides, the report says we won't achieve the goal of capping global temperatures from rising more than 2 degrees Celsius unless more investments are made.

The United Nations estimates an additional $1 trillion needs to be invested annually in renewable energy by 2030. Right now, the average global investment is around $200 billion.