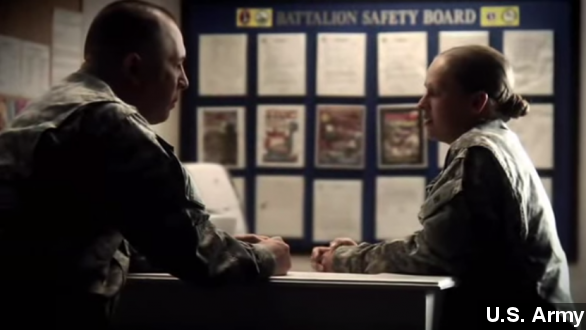 SMS
Software Helps U.S. Army Spot Soldiers At Risk Of Suicide
By Rosie Newberry
By Rosie Newberry
November 13, 2014
The U.S. Army is using new software to identify soldiers who are at high risk of suicide based on a variety of factors.
SHOW TRANSCRIPT

The U.S. Army is employing a new type of defense: software that can predict suicide risk among soldiers.

That's because half of the soldier suicides that occurred within one year of a major U.S. Army study belonged to the category the Army considered at highest risk of suicide. Approximately 5 percent of those in service fall in this highest-risk category. (Video via U.S. Army)

A computer model compared hundreds of risk factors for the five-year study called The Army Study to Assess Risk and Resilience in Servicemembers, or Army STARRS.

Researchers identified dozens of risk factors. Unsurprisingly, they found some of the most important factors included past suicidal behavior and diagnosed psychological problems.

WMAR: "Researchers found male soldiers were at a higher risk, as well as soldiers who enlisted at a later age."

Male U.S. soldiers have much higher rates than female soldiers, accounting for about 97 percent of military suicides, according to a 2013 analysis of state suicide rates.

And scientists hypothesize an older enlistment age indicates a person had less conviction in knowing what he or she wanted to do in life.

STARRS also found possessing a registered firearm, having a criminal record and loss of hearing that could indicate undiagnosed brain injuries all indicated a soldier was at higher risk of suicide.

Suicide rates among soldiers have been rising since 2004, surpassing civilian rates. On average, an estimated 22 military veterans took their lives every day in the U.S. in 2010, according to the U.S. Department of Veterans Affairs. (Video via YouTube / Plethrons)

"Fall of 2008. Early fall. Our unit was deploying. I was on the rear detachment, and the night before deployment, one of the soldiers in my squad killed himself." "It was devastating." (Video via U.S. Army)

With the new software, the U.S. Army will try to create new suicide intervention and prevention methods for soldiers with a high risk of suicide.

The hope is also to continue developing useful computer models for suicide risk. Until then, the Army reinforces methods like the mnemonic ACE.