Socialism Is Trending — Here's What It Really Means 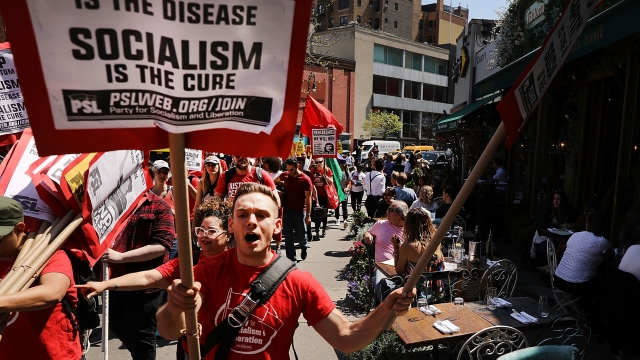 SMS
Socialism Is Trending — Here's What It Really Means
By Ben Schamisso
By Ben Schamisso
March 27, 2019
Beyond the coded nature of the word, there's a healthy debate about how to best reduce inequalities without hurting growth.
SHOW TRANSCRIPT

If there's one extremely coded yet misunderstood word you're guaranteed to hear time and time again in the run-up to the 2020 election, it's…

"America will never be a socialist country."

"We're not going back to socialism."

Yes, "socialism" is a trending word. But what does it actually mean?

In an ideal socialist society, a governing body manages how workers produce and consume goods in a way that's supposed to benefit everyone equally. To achieve that, the state nationalizes companies and natural resources.

Advocates say it empowers workers. But critics say you need competition and individualism to create progress. That being said, people often use the word incorrectly.

"There's a huge difference between socialism and democratic socialism."

Democratic socialism works within a capitalistic system by protecting people with a strong safety net. Many European countries are considered social democracies because of their high income taxes and generous welfare programs.

"We leave capitalism free to do its own course. And then through policies of redistribution, higher taxation, welfare programs, we try to help mitigate inequalities to some extent."

And that's exactly what progressive policy proposals such as "Medicare for all" and tuition-free public college hope to achieve.

"When I talk about democratic socialism, I'm talking about Medicare."

"What that means for me is health care as a human right. It means that every child, no matter where you are born, should have access to trade school or college education."

Now, there are proposals out there that meet the actual definition of socialism. They're about distributing — not redistributing — wealth and power equally from the start.

One is Universal Basic Income, or giving money to all citizens every month, no strings attached.

"We will have to have some sort of universal basic income."

"What I say about Universal Basic Income is it's not socialism. It's capitalism where income doesn't start at zero.”

Another popular socialist concept comes from Germany, where companies give workers a seat at the corporate board.

"Let's put some employees on the board, let the employee elect some people so you've got multiple representation."

"In some German enterprises, workers and manager sit together at the board and they make some decisions together. Not all decisions, and not the most important decision, … but they make decisions about maybe how certain conditions are within the workplace, health and safety and other issues."

Whether they are redistributive or distributive, all these progressive proposals are, of course, very contentious. That's partly because they would be extremely costly and would require tax rates to skyrocket …

"You would be paying twice what you already do in taxes, that still doesn't cover the tab. My god, free health care is expensive."

And partly because they would give far more power to the government at the expense of companies and individuals.

"It appears that Democrats want the government to have powers over patients."

"If we make it more onerous for companies to locate in the U.S., they are going to locate somewhere else, and that hurts precisely the group that Sen. Warren is trying to help."

According to political science professor Chiara Cordelli, that's partly because younger generations didn't grow up during the Cold War. She says they're less likely than their parents to associate socialism with authoritarian regimes in China, North Korea or Venezuela, and more likely to associate the word with European social democracies.

"They see that many people's chances in life depends on how rich their parents are, what kind of education their parents have. 'Is this freedom?' And finally, I would say that there is, of course, the environment that is a central concern for this generation. This has also generated a lot of reflection and thinking about whether a certain kind of capitalism is compatible with environmental sustainability over time."

So regardless of your political views, remember that beyond the coded nature of the word "socialism," there's a healthy debate about how to best reduce inequalities without hurting growth.