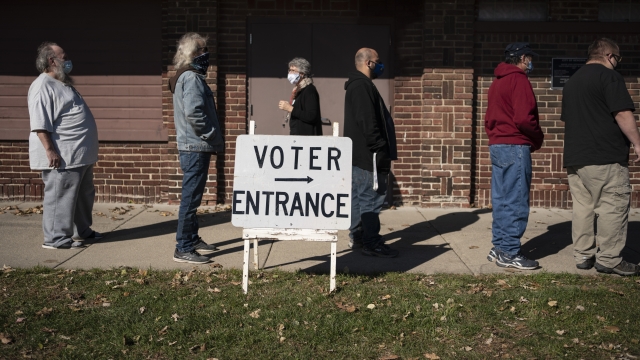 Election week served as a test for social media companies that recently issued a number of updates about how they intend to deal with election-related misinformation.

Twitter is taking the most aggressive action to combat misinformation.

On election night, they quickly placed a warning on President Trump's tweet for "making a potentially misleading claim about an election." The label blocked users from responding, favoriting or retweeting the post.

"On the Twitter side, it was the fastest one we'd seen. This is much faster in terms of how fast they added the label," said Kate Starbird, associate professor in the Department of Human Centered Design & Engineering at the University of Washington.

These labels have a limited effect. After the tweet was blocked, other accounts parroted the claim and spread it further.

"It did slow down the spread a lot," said Isabella Garcia-Camargo, Project Manager at the Election Integrity Partnership. "We saw a move by conservative influencers saying that everyone should copy and paste the tweet, and then there was a big push to get that done."

Facebook is taking a similar labeling approach to correct false narratives. Experts say that Facebook's labels are limited compared to Twitter's, because they do not limit interaction with posts.

"We can't measure the Facebook controls," Starbird said. "We don't know how effective the labels are by themselves. The only thing we could see is when Twitter does you know take out the ability to retweet or change something, we can see the cliff on retweeting on that."

A lot of the action stopped at labels, though.

"We unfortunately see American politicians who help build the scaffolding for some of these narratives," said Emerson Brooking, resident fellow at the Atlantic Council's Digital Forensic Research Lab.

Experts noted that verified accounts were among the biggest problems, often pushing the most viral misinformation narratives without punishment.

"Newly elected congresswoman elect Marjorie Taylor [Greene] was one of the first politicians to be amplifying the stolen vote narratives," Brooking said.

Greene is a known supporter of the QAnon conspiracy theory.

"The fact that you have the same accounts, who violate these rules over and over again that don't get punished is going to be something the platforms will have to address," said Alex Stamos, director of the Stanford Internet Observatory.