Social Media Is Making Some National Parks Too Popular 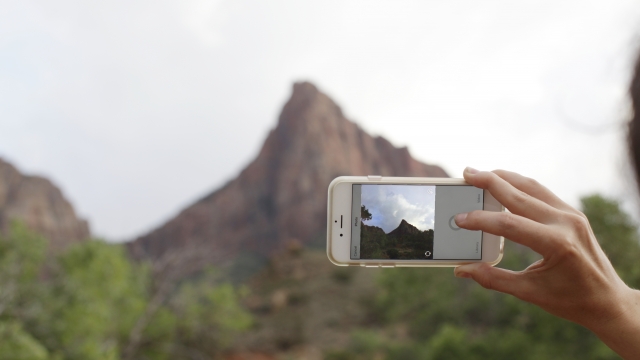 Since the early 2010s, America's national parks and historic monuments have drawn record numbers. They see 330 million annual visitors, and experts think social media has helped make them more popular than ever. That added traffic helps the parks make money and raise awareness, but it can also make the strain on parks' infrastructure and ecology even greater.

Social media drives a lot of traffic to less-traveled areas through geotagging — or attaching metadata to a post which can show users exactly where a photo was taken and the path to get there. Experts think as more people find out-of-the-way spots and travel to them, the wilderness and wildlife nearby deal with the increased wear and tear of foot traffic.

Those posts can cause huge influxes of visitors nearly overnight. One swimming area in Virginia's George Washington and Jefferson National Forests sees 400 daily visitors now that it's been posted to Instagram, up from 10 or 20 people a day. Horseshoe Bend near Grand Canyon National Park has seen annual visitors climb since Instagram was invented — from 100,000 in 2010 to 2 million in 2019. According to Dana Watts, Executive Director for the Leave No Trace Center For Outdoor Ethics, it's putting serious stress on some parts of the park.

"It was an area that wasn’t heavily visited," Watts told Newsy. "And more and more, people were finding it because of location tagging and getting there. And they just didn’t have the infrastructure to deal with the number of people that actually were starting to go to that area in Arizona. The land managers around that area are taking notice and they are now having to scramble to get that infrastructure in place."

Some experts say parks will need a lot more money to really address the social media influx. The NPS reportedly has a nearly $12 billion, 8-year maintenance backlog. Thousands of miles of roads and trails need repairs — so that millions of visitors don't wear them down even more quickly.

Of course, social media can still help parks make some money — which does offset some of the burden of increased attendance. But it's relatively small. Of the 417 National Park Sites in the U.S., only 117 collect fees, and each park only keeps about 80 percent of that money for its own operations.

Watt's Leave No Trace Center For Outdoor Ethics is working to teach these increasingly-online visitors to be more mindful of their impact. As part of their campaign, they've recently introduced social-media guidelines for those traveling to national parks, to help people think about the ethical concerns that come with tagging.

"Influencers can play a very important role, not in shaming, but in kind of taking that high road and talking very positively about leave no trace, Watts said. "There's so many versions of how people practice leave no trace, rarely is there a right and wrong. That's why it's an ethic. It's an outdoor ethic."