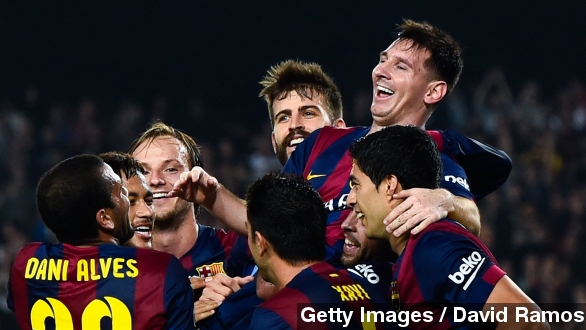 FC Barcelona's Lionel Messi has been plowing through the record books lately. And the dominos continue to fall.

In a 4-0 shut out of APOEL Nicosia Tuesday, the Barcelona forward blazed past Raul Gonzalez — better known as simply Raul — to become the all-time leading scorer in Champions League history with 74 goals.

That means he broke two scoring records within four days. So just how good is Leo Messi?

A writer for Bleacher Report argues that he's the best player in Barcelona history — that's 115 years, folks. The writer says, "It's impossible to compare a midfielder to a striker in an individual matchup, but the fact remains that football is about scoring goals. ... Messi is the master of that, among plenty of other things."

That's saying something, since a lot of great players have come through Barcelona, which more than one sportswriter has dubbed the best team ever.

And Tuesday's Champions League record noticeably puts Messi just past another current soccer giant: Christiano Ronaldo. It's almost irresistible to compare the two, especially considering they're only separated in the league by four goals.

Not to make this a kicking contest between Messi and Ronaldo, but the latter has a chance to close that gap when he takes the pitch against FC Basel Wednesday.