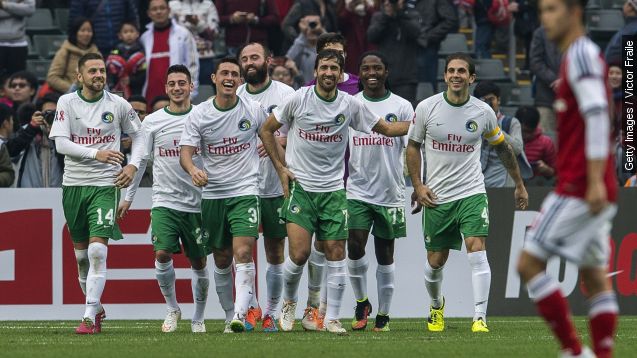 More than 50 years after the U.S. imposed an embargo on Cuba, the two sides are using soccer to help mend their strained relationship.

The New York Cosmos will play the Cuban National Team Tuesday in an international friendly. The team arrived in Havana Monday with former Brazilian soccer star and former Cosmos player Pele in tow. (Video via Americateve)

"I'm happy when there are moments of peace, moments to bring people together. It's a great joy to be here during this time when soccer is helping bring peace for Cuba and the United States," Pele said during a press conference.

This is the first time since the Chicago Sting in 1978 that a U.S. pro soccer team has played in Cuba. Then-president Jimmy Carter was attempting to better relations with the country. Sports just have a way of bringin' us all together.

Carter opened non-diplomatic relations with the country in the late 70s, but it wasn't until January this year until relations with the two sides eased. The U.S. just recently removed Cuba from its state sponsors of terrorism list. (Video via NBC)

Although the New York Cosmos' needed the White House's approval and help to get to Cuba, the BBC points out the match is seen as an unofficial way to mend relations.

"It may be diplomatic, the thaw, they may be on the verge of announcing the reopening of embassies in their respective capitols, but by and large this is being driven through sporting, artistic and cultural exchanges like this one," the BBC reports.

And soccer isn't the only sport looking to play in Cuba. Although under the far-reaching U.S. sanctions, the nation's still added tons of talent to Major League Baseball rosters.

Major League Baseball commissioner Robert Manfred said the league is exploring games in Cuba in the near future.

Although no games are currently in place for Major League Baseball in Cuba. The Cosmos kick off against the Cuban National Team at 5 p.m. EST on ESPN.