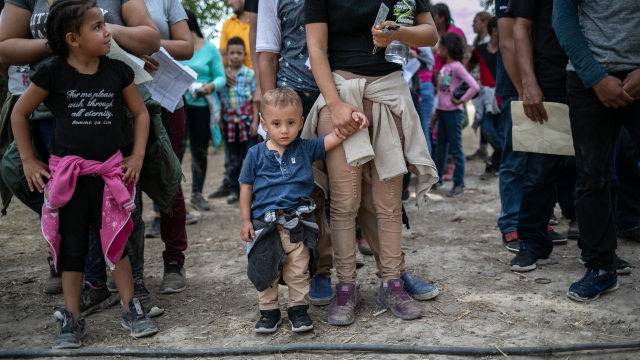 SMS
U.S. Appeals Court Upholds Sanitary Conditions For Children At Border
By Johannah Grenaway
By Johannah Grenaway
August 15, 2019
The appeals panel said it is requiring hygiene, food and sleeping provisions "rather than allowing the government to decide whether to provide them.”
SHOW TRANSCRIPT

On Wednesday, the 9th U.S. Circuit Court of Appeals in San Francisco dismissed the Trump administration's argument saying sanitary conditions at the border does not include providing children with soap.

The appeals panel said, “assuring that children eat enough edible food, drink clean water, are housed in hygienic facilities with sanitary bathrooms, have soap and toothpaste, and are not sleep-deprived are without doubt essential to the children’s safety."

The Trump administration argued that soap may not be necessary for children staying in short-term custody. It also claims the obligation to keep children detained in safe and sanitary conditions would not require providing towels, showers, dry clothing or toothbrushes either.

The administration was challenging a ruling a judge made two years ago regarding the Rio Grande Valley facility, which said personal hygiene, proper sleeping conditions, reasonable comfortable temperatures and adequate food and drinking water should be provided for minors held at border facilities.

But, conditions at U.S. Customs and Border Protection facilities have been criticized and accused of not providing hot meals, showers or clean clothes for migrants. Some of the facilities were also allegedly keeping the lights on at all times.

The 1997 Flores Agreement is another protection for migrant children detained at border facilities. It says certain standards should be met and children should be released within a reasonable amount of time. A U.S. district judge ruled in 2017 that the agreement was breached. Young migrants said they had to sleep in cold, overcrowded cells, were given inadequate food and dirty water. Since then, the judge appointed an independent monitor to evaluate conditions.

During another hearing in June 2019, a U.S. government lawyer argued the Flores Agreement was too vague and "it was left to agencies to determine" what provisions were necessary.

The appeals panel in Thursday's hearing was sure to outline the protocols for children at border facilities.  It said the district court is properly following the agreement and requiring the conditions listed "rather than allowing the government to decide whether to provide them.”