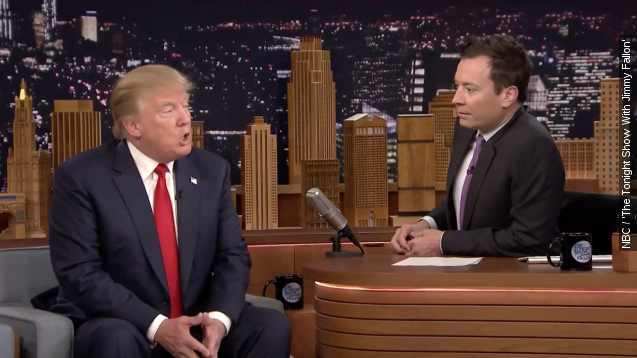 "It's gonna be uuuuge," said Trump and Fallon playing Trump.

But some people thought the appearance didn't really turn out to be that ... uuuuge.

Trump rolled out some of his predictably vague talking points about bringing respect back to America.

Fallon didn't ask many hard questions, which led Politico to write, "[Trump] got exactly what he wanted: an easy ride."

Although after one of Trump's signature monologues, Fallon did push back a bit.

"What? What question did I ask? Did I ask about stadiums? I don't know what the hell just happened," said Fallon.

The Wall Street Journal praised Fallon, saying, "It took a comedian to ask Republican presidential candidate Donald Trump some hard questions about his improbable rise to front-runner status in the nominating contest."

The journal may have been referring to moments like this one.

"How are you going to create jobs in this country?" said Fallon playing Trump.