So Many Protesters Were Arrested At Capitol, Police Ran Out Of Room 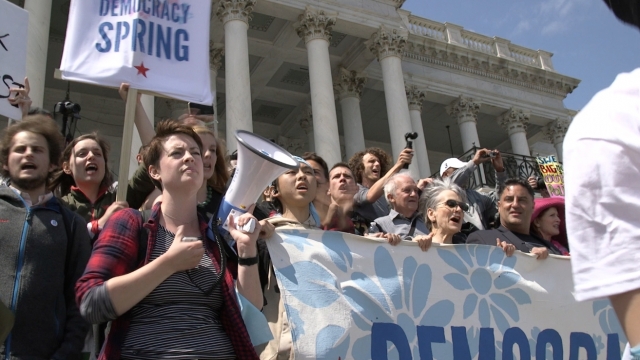 SMS
So Many Protesters Were Arrested At Capitol, Police Ran Out Of Room
By Zach Toombs
By Zach Toombs
April 11, 2016
Hundreds of people marched with Democracy Spring from Philadelphia to Washington to sit in at the U.S. Capitol building and risk arrest.
SHOW TRANSCRIPT

Police at the U.S. Capitol arrested so many protesters, they had to stop for a while. Why? "Because they're running out of space," one protester reported.

About 300 people were arrested as part of Democracy Spring's protest against money in politics. That was more than the police bus could carry. Democracy Spring marched from Philadelphia to Washington over 10 days.

"85 percent of Americans want fundamental change in the way we finance our elections," Democracy Spring organizer Elise Whitaker told us. "We've been really able to push forward together on this, knowing that the democracy is the first issue for us to move forward on anything else we want to do."