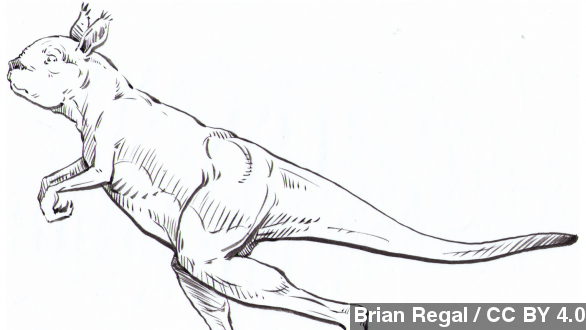 When we think of kangaroos, we think of a hopping mammal that lives in Australia and occasionally boxes world-famous movie directors. (Video via CBS)

But a new study finds an extinct group of the kangaroo family couldn't actually hop.

Not only that — the study, published in PLOS One, says thousands of years ago, this group of kangaroos — the Sthenurines — could weigh more than 500 pounds, which kept its feet firmly on the ground.

ANCHOR VIA BBC: "Researchers believe the 9-foot tall creature, which had a rabbit-like face, would have strolled around on two legs. They believed it weighed too much to hop."

There are several other differences researchers pointed out between those ancient and enormous kangaroos and the ones we know today: rigid spines, tails that weren't flexible, larger hip and knee joints and a flared pelvis. These are all findings that led researchers to the conclusion that the prehistoric 'roos couldn't hop.

The study did conclude that unless a fossilized trackway — science speak for fossilized footprints — was found, it'd be hard to "completely" verify the hypothesis.

It's not the first time scientists have found species' ancestors that don't look a whole lot like their modern descendants — just think of Megatherium. This giant looked like a cross between a bear and an anteater, but was actually an ancestor of the sloth.

This video includes images from Getty Images and Angela Marie Henriette / CC BY 2.0 and music from Pierlo / CC BY 3.0.