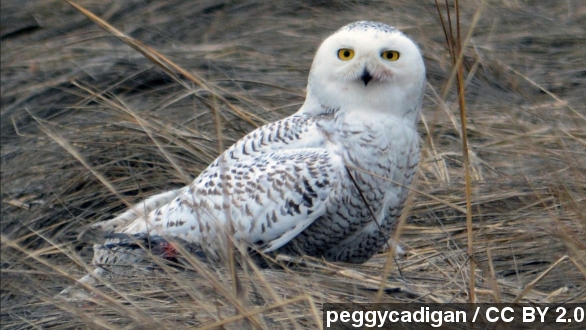 Snowy owls are invading New York, and the freezing-cold temperatures are to thank for their arrival.

So far, at least seven of the owls have been spotted in the New York City area.

Including on Governor's Island, which tweeted out a picture of a new feathered friend.

New York Magazine reports bird experts believe this may be the first time snowy owls have started living on that island.

Snowy owls have been attracted to the cold winter temperatures in the U.S. before. WCAU says they were spotted in Pennsylvania, New Jersey and Delaware in 2013.

Now, snowy owls became more of a household name because of the owl Hedwig in the "Harry Potter" series, but these owls aren't native to Great Britain. Or New York City. (Video via Warner Bros. / "Harry Potter and the Sorcerer's Stone")

They're from the Arctic, of course. And they're snowy in color: The male owls stay white as they grow older, though females do turn a darker shade. (Video via Cornell Lab of Ornithology)

NBC reports these birds will travel to Canada, Alaska and parts of Asia during the summer months, usually traveling wherever there are high concentrations of rodents to eat.

And New York is welcoming the owls with open arms this year.

A spokeswoman for Governors Island spoke to DNAinfo about its snowy owl, saying, "We don't have a nickname for him yet, but we'd be happy to get suggestions from the public."