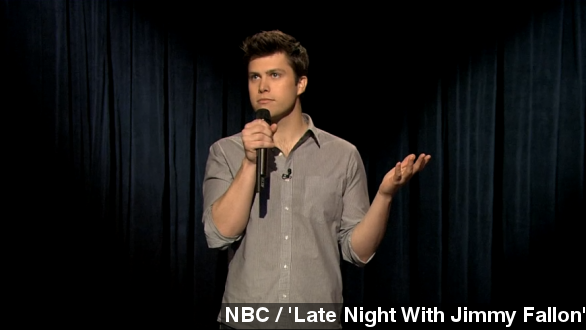 By Danny Matteson
January 23, 2014
Jost will replace current co-anchor Seth Meyers, who is moving on to host "Late Night" on NBC.
SHOW TRANSCRIPT

​It's been a season of changing faces at "Saturday Night Live" — first, its first black female cast member in six years, then two new black female writers, and now a new face replacing Seth Meyers behind the "Weekend Update" desk.

That particular face is Colin Jost. Besides serving as head writer, Jost will also be joining Cecily Strong to deliver faux news reports in the show's "Weekend Update" segment. (Via ColinJost.com)

He'll be replacing current co-anchor Seth Meyers, who is moving on to host "Late Night" on NBC. That hosting gig was previously filled by another former Weekend Update anchor, Jimmy Fallon.

Fallon, is moving on to host "The Tonight Show." (Via Wikimedia Commons / Montclair Film Festival)

Back to Jost. He’s been with the show since 2005, when he became one of the shows youngest writers ever at the age of 22. (Via YouTube / Colin Jost)

Previously, he attended Harvard where he was the President of The Harvard Lampoon — a comical publication that also gave rise to comedians like Conan O’Brien and several writers for The Simpsons.

As Time Reports, in his tenure at SNL Jost and the rest of the writing team have won three Writer’s Guild Awards, a Peabody, and have been nominated at the Emmys eight times.

So far the pick is going over well with at least one SNL alum. The former writer behind the Stefon character, John Mulaney, had this to say.

"I am thrilled for @TheColinJost! One of the funniest/smartest people in comedy! He once fell asleep on a burger. He will kill it on Update." (Via Twitter / @Mulaney)

And if he's got plans to make a name for himself in show business he may be in the right place — as Deadline Hollywood notes many previous Update hosts have moved on to bigger and better things.

“It has produced two late-night talk show hosts (Fallon, Meyers) and two TV series and film stars in [Tina] Fey and Amy Poehler. Among the four of them, they have hosted the Emmys, the Golden Globes and the White House Correspondents’ Dinner.” (Via Deadline Hollywood)

Jost is set to begin the new role March 1st. Seth Meyers does his last episode at the desk on the February 1st episode hosted by Melissa McCarthy.