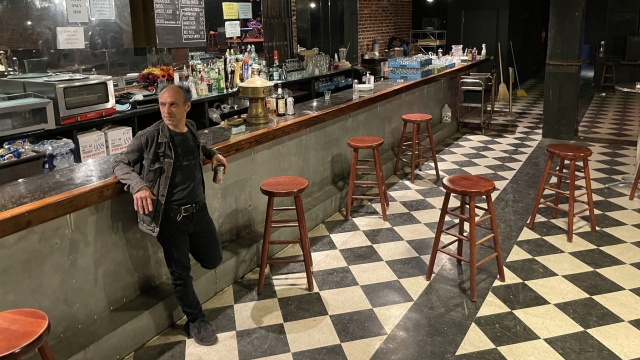 SMS
COVID Aid To Small Venues At A Trickle
By Patrick Terpstra
By Patrick Terpstra
June 7, 2021
Owners of independent theaters and stages hear nothing back after applying for federal COVID aid — or are wrongly denied for being "dead."
SHOW TRANSCRIPT

Pandemic restrictions have forced the Black Cat concert club to stay closed for more than a year now.

Principal owner Dante Ferrando is among thousands of small venue owners Newsy discovered are still waiting on funding from a federal grant program run by the U.S. Small Business Administration.

"It’s almost impossible to make it out of a situation like this without a big grant," Ferrando said.

The SBA just denied his application for a shuttered venue operators grant, saying the Washington club was on a do-not-pay list.

"We were panicking like crazy for a day," Ferrando said.

A series of phone calls later, he and his wife figured out the SBA had mixed up the Black Cat’s federal tax identification number with the Social Security number of someone who is dead.

"We did find out, slowly, that there were more people on the do-not-pay list, some of which were also corporations that were dead," Ferrando said.

Like other federal COVID-19 relief programs Newsy’s investigative team has been examining, government errors are among problems tangling up the grant program for America’s independent stages, among the hardest hit businesses in the pandemic.

It's urgent aid, approved by Congress in December, not getting to independent theaters, concert halls and museums.

"This is our lives," said Stephen Tyler, managing partner of Tower Theatre in Oklahoma City. He said he has heard nothing about his application for $1.4 million from the grant program.

The theater is planning full concerts again but not until August.

"We have an amazing future ahead of us, but we might die," Tyler said. "We’re still on the launch pad. The rocket might still blow up."

The SBA has been under pressure to dole out money fast while avoiding the kind of fraud that targeted other COVID-19 relief programs.

"Each of these applications is complex to review," said SBA Administrator Isabel Guzman during a Senate committee hearing May 26. "We are feeling good about the program and our ability to start disbursing awards soon."

Ferrando is appealing the SBA’s initial denial of funding for the Black Cat.

"It is freakish to me that you can be in a position where somebody is going to give you hundreds of thousands of dollars and you still resent them," he said. "They should’ve been able to do this differently. It’s a huge chunk of money."