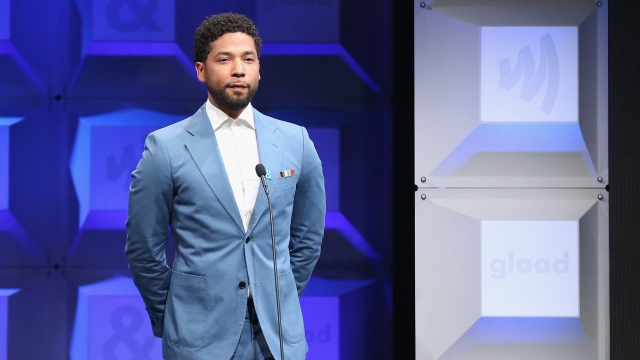 "Empire" actor Jussie Smollett posted bond Thursday after a judge set his bail at $100,000 and told him to surrender his passport.

The head of the Chicago Police Department told reporters Smollett staged an alleged hate crime attack on himself last month "to promote his career."

Smollett was taken into custody early Thursday morning on suspicion of filing a false police report. He's been charged with felony disorderly conduct.

"How can an individual who has been embraced by the city of Chicago turn around and slap everyone in this city in the face by making these false claims? Bogus police reports cause real harm. They do harm to every legitimate victim who's in need of support by police," Chicago police superintendent Eddie Johnson said.

According to police, Smollett, who is black and openly gay, reported two men assaulted him while he was walking downtown in the early hours of Jan. 29. Smollett said the men yelled racial and homophobic slurs at him, poured an unknown chemical substance on him and put a rope around his neck.

The Chicago Police Department vowed to investigate the attack as a "possible hate crime." Officers arrested two men in connection with the incident. But they were later released without being charged after authorities said they discovered "new evidence" in the case.

Authorities said Thursday Smollett was "dissatisfied with his salary" and paid the two men $3,500 to stage the incident. The actor's attorneys previously denied he was involved in orchestrating the attack.

Filing a false police report is a Class 4 felony. Smollett could face up to three years in prison if he's convicted. Smollett is expected back in court on March 14.